Charity Hospital was one of two teaching hospitals which were part of the Medical Center of Louisiana at New Orleans (MCLNO), the other being University Hospital. Three weeks after the events of Hurricane Katrina, then Governor Kathleen Blanco said that Charity Hospital would not reopen as a functioning hospital. The Louisiana State University System, which owns the building, stated that it had no plans to reopen the hospital in its original location. It chose to incorporate Charity Hospital into the city's new medical center in the lower Mid-City neighborhood. The new hospital completed in August 2015 was named University Medical Center New Orleans.

Prior to Katrina, Charity Hospital operated in the New Orleans Hospital District at 1532 Tulane Avenue, New Orleans, Louisiana 70112–1352. The building is approximately six-tenths of a mile on the opposite side of I-10 from Interim LSU Hospital. 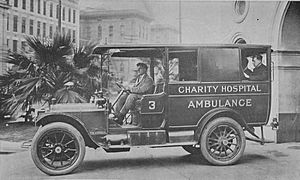 Charity Hospital was founded on May 10, 1736, by a grant from Jean Louis, a French sailor and shipbuilder, who died in New Orleans the year before. His last will and testament was to finance a hospital for the indigent in the colony of New Orleans from his estate.

Charity Hospital quickly outgrew its original facility, and a second hospital was built at the edge of the colony on Basin Street in 1743. A third hospital was built nearby in 1785. It was renamed the San Carlos Hospital in honor of King Charles III, King of Spain, after New Orleans was ceded to Spain in 1763. 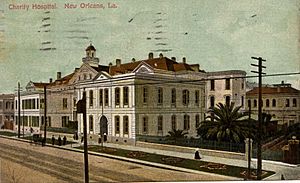 A fire destroyed this hospital in 1809. Without a building, a temporary hospital was established at the Cabildo for a month, then at the Jourdan residence in the Faubourg Marigny for six months, then the dilapidated De La Vergne plantation for 5 years while a fourth hospital was built. This new hospital was built at the edge of the city on Canal Street where The Roosevelt New Orleans Hotel is currently located. The hospital was completed in 1815, but this hospital was widely criticized as inadequate and underfunded.

In 1832, a fifth hospital was built on Common Street (modern Tulane Avenue) between Howard Street (modern LaSalle Street), Robertson Street, and Gravier Street, on the edge of the Faubourg St. Marie. This hospital came under the administration of the Sisters of Charity in 1834, who would run the hospital for the next century. Under their care, Charity Hospital, partnered with the Medical College of the University of Louisiana.

By the 20th century, the city of New Orleans was rapidly expanding, and the demand for indigent medical services again exceeded Charity Hospital capacity. A sixth hospital was built on Tulane Avenue in 1939. At the time it was the second largest hospital in the United States with 2,680 beds. 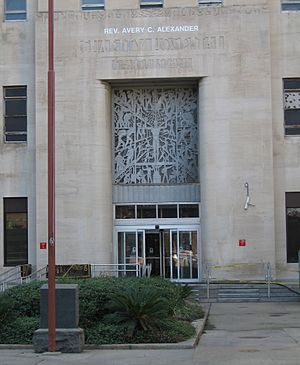 The building's cornerstone lists the Federal Emergency Administration of Public Works (later called the Public Works Administration) as the building authority. The architects were Weiss, Dreyfous & Seiferth, who were also responsible for the Louisiana State Capitol in Baton Rouge. The hospital features two stone bas-reliefs and a cast-aluminum screen called Louisiana at Work and Play, all by artist Enrique Alférez.

The LSU Health Sciences Center in New Orleans (LSUHSC-NO) was built adjacent to Charity Hospital in 1931 under the aegis of Louisiana Governor Huey Pierce Long. Serving one of the largest populations of uninsured citizens, Charity Hospital also boasted the #2 Level I Trauma Center in the nation, with the #1 rank belonging to Cook County Hospital in Chicago, Illinois.

In 1968, the hospital lost a malpractice case before the U.S. Supreme Court. In Louise Levy, Administratrix v. Louisiana through the Charity Hospital of Louisiana at New Orleans Board of Administrators, et al., the court ruled that a child born out of wedlock could not be prevented from suing on behalf of a deceased parent.

The Louisiana Department of Health and Human Resources (DHH) took control of Charity Hospital in 1970. The hospital was transferred to the Louisiana Health Care Authority (LHCA) in 1991 and to the LSU System in 1997.

Like its sister hospital, University Hospital, Charity Hospital sustained severe flood damage during Hurricane Katrina. The evacuation of patients from the flooded hospital made national headlines. After the storm, a temporary clinic named the Spirit of Charity was established at the Convention Center. The temporary Spirit of Charity Clinic was later relocated to the New Orleans Centre building adjacent to the Superdome. In February 2007, a renovated University Hospital had taken over interim responsibilities of emergency care to the city which Charity originally provided. In August 2015, the LSU Health Sciences Center completed the new $1.1 billion medical center named University Medical Center New Orleans. The hospital consolidated the functions of both the already closed Charity Hospital and University Hospital.

The Foundation for Historical Louisiana, as charged in HCR 89 of the 2006 Louisiana Legislature, hired the internationally renowned architectural firm, RMJM Hillier, to "…examine and evaluate the entire Big Charity structure to determine the advisability of repairing or restructuring the entire facility." RMJM Hillier determined the art deco building to be structurally sound—with its original design being architecturally exceptional and "ahead of its time." Rehabilitation into a 21st-century, state-of-the-art facility would be the fastest, most cost-effective way to return quality healthcare and a teaching hospital to New Orleans. This idea was scrubbed in favor of using University Hospital as an interim hospital and building University Medical Center New Orleans and a new Southeast Louisiana Veterans Health Care System Medical Center in the adjacent neighborhood of lower Mid-City.

Plans to re-develop the site

There have been several efforts to renovate or restore Charity Hospital. In October 2019, LSU, the organization that has owned the structure since the 2005 evacuation and subsequent closure of the hospital, approved a re-development project to turn the former hospital into a mix of homes, retail space and other facilities. The redevelopment project has been long-awaited by city leaders hoping to revitalize the former "booming" central business district that has been suffering since the closure of Charity and surrounding buildings due to Hurricane Katrina. The contract was awarded to a group called 1532 Tulane Partners, a joint venture between New Orleans-based CCNO and Israeli development company El-Ad Group. Work is expected to begin on the giant building in fall 2019 and construction should take 3 years. The redevelopment project is expected to cost $300 million that will be partly funded by tax credits, and the building will not be subject to property tax as the building will still be owned by LSU. The structure will include about 390 residential units plus retail shops and restaurants. Tulane University will serve as the main tenant of the building as they will use it for student housing and offices. 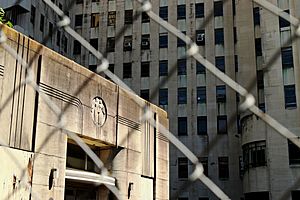 The main entrance to Charity Hospital from Tulane Ave. 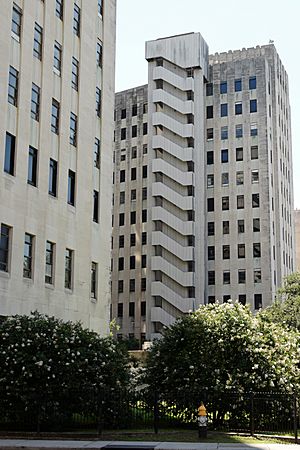 Charity Hospital was featured in the TLC documentary series, Code Blue. The series documented the lives of the hospital physicians and their patients. The episodes often illustrated the rate of violence in New Orleans by chronicling the high volume of patients who were treated in the emergency department with gunshot or stab wounds.

Charity Hospital was also featured in two episodes of TLC's Trauma: Life in the ER, which focused on Charity's emergency department,.

Charity Hospital was also in an episode of NY Med, where a doctor reminisces of his time spent at the hospital.

Big Charity, a documentary film by Alexander John Glustrom, tells the untold story behind the death of Charity Hospital and unveils the truth about one of the largest single payouts of federal disaster funds in state history.

All content from Kiddle encyclopedia articles (including the article images and facts) can be freely used under Attribution-ShareAlike license, unless stated otherwise. Cite this article:
Charity Hospital (New Orleans) Facts for Kids. Kiddle Encyclopedia.