Charles B. Stoughton facts for kids 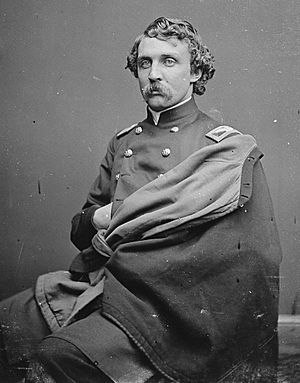 Charles B. Stoughton. Photo is before July, 1863, when he was wounded and lost an eye.

Charles Bradley Stoughton (October 31, 1841 – January 17, 1898) was an officer and regimental commander in the Union Army during the American Civil War.

Charles B. Stoughton was born in Chester, Vermont on October 31, 1841. He was the son of Henry Evander and Laura (Clark) Stoughton. Stoughton was educated in Bellows Falls, Vermont, graduated from Norwich University in 1861, and delayed plans to study law so he could enlist in the Army.

He was commissioned adjutant of the 4th Vermont Infantry on August 1, 1861 with the rank of Captain, and mustered into military service on September 21. The 4th Vermont was commanded by his brother, Colonel Edwin H. Stoughton. Charles Stoughton was promoted to Major on February 25, 1862. He took part in the action at all the regiment's battles during the Peninsula Campaign.

Stoughton led the regiment at the Battle of Fredericksburg, on December 13, 1862, where the 4th Vermont suffered 56 casualties. He reported "My colors were completely riddled with canister and musket balls, scarcely hanging together. The top of the staff, upon which is a brass eagle, was shot away by canister, but saved, and brought away."

He continued to lead the regiment during its participation in the battles of Marye's Heights, Salem Church, and Gettysburg. On July 10, 1863, during the Union army's pursuit of the retreating Army of Northern Virginia, Stoughton was severely wounded in an engagement near Funkstown, Maryland, resulting in the loss of his right eye. He resigned on February 2, 1864, as a result of his wounds. In the omnibus promotions that followed the end of the war, he was brevetted a Brigadier General to date from March 13, 1865 in recognition of his faithful and meritorious service. 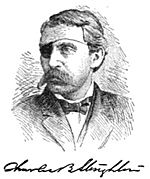 Stoughton after the Civil War.

After the war Stoughton studied law with his father, attained admission to the bar, and became an attorney in the New York City practice of his uncle, Edwin W. Stoughton.

In his later years, Stoughton practiced law in New Haven, Connecticut, and he lived there after retiring. His health began to decline, and he moved to the Vermont Soldiers Home in Bennington, Vermont, where he died on January 17, 1898. He was buried at the Immanuel Cemetery at the Immanuel Episcopal Church in Bellows Falls, Vermont.

In April, 1869 Stoughton married Ada Ripley Hooper of Boston, Massachusetts. They were the parents of one son and five daughters: Bradley; Laura; Leila; Mildred; and Isabel.

Mildred Stoughton was the wife of Benjamin I. Spock. Mr. and Mrs. Spock were the parents of Dr. Benjamin McLane Spock (1903–1998), a leading pediatrician and peace advocate.

All content from Kiddle encyclopedia articles (including the article images and facts) can be freely used under Attribution-ShareAlike license, unless stated otherwise. Cite this article:
Charles B. Stoughton Facts for Kids. Kiddle Encyclopedia.