Charles Francis Summers (1858-1945) was an Australian sculptor. The son of the British-born sculptor Charles Summers, he worked mainly in Rome, travelling back and forth to Australia to sell his pieces.

Summers lived in Rome for thirty years, studying sculpture under his father, and drawing with Italian painter Ludovico Seitz.

In Melbourne, he had a studio in the Grosvenor Chambers, and later, in Jolimont. He was amongst the first to quarry marble in Victoria, in the area of Benambra. 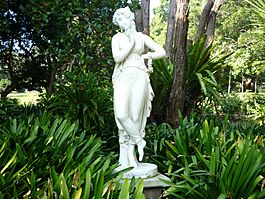 A selection of Summers's works is preserved in the Art Museum of Rotorua, New Zealand.

A number of Summers' sculptures including La Ballerina (c.1880s), The Four Seasons (Spring, Summer, Autumn, and Winter) (c. 1870s), and The Boxers are situated in the Royal Botanic Garden, Sydney. Five of his sculptures (Flight From Pompeii, Modesty, Rebekah, Ruth, and Susannah) along with the pavillion in which they are housed are listed on the Victorian Heritage Register and are located in the Ballarat Botanical Gardens. "The Shunammite Woman" is held by the Bendigo Art Gallery.

All content from Kiddle encyclopedia articles (including the article images and facts) can be freely used under Attribution-ShareAlike license, unless stated otherwise. Cite this article:
Charles Francis Summers Facts for Kids. Kiddle Encyclopedia.