He was born at Reading, Berkshire in 1759 and baptised in St Laurence's parish church on 24 October of that year. He was the fourth and youngest son of Richard Simeon (died 1784) and Elizabeth Hutton. His eldest brother, named Richard after their father, died early. His second brother, John, entered the legal profession, became an MP and received a baronetcy. The third brother, Edward Simeon, was a director of the Bank of England.

Simeon was educated at Eton College and King's College, Cambridge. As an undergraduate at King's from 1779, brought up in the High Church tradition, he read The Whole Duty of Man and then a work by Thomas Wilson on the sacrament, and taking communion at Easter experienced a Christian conversion. In 1782 he became Fellow of King's College, and was ordained deacon. He graduated B.A. in 1783 and, in the same year, was ordained a priest of the Church of England. He began his ministry as deputy to Christopher Atkinson (1754–1795), at St Edward King and Martyr, Cambridge. Atkinson introduced him to John Venn and Simeon then met Henry Venn, confirming his evangelical and Calvinist views.

Simeon received the living of Holy Trinity Church, Cambridge, in 1783. The appointment, technically a curacy, followed the death of the Rev. Henry Therond. Simeon's father intervened with James Yorke, the Bishop of Ely, and he was appointed, under the age of 23, as a curate-in-charge for the bishop. He was at first unpopular, and indeed the congregation would have preferred John Hammond (died 1830), who had been curate there, and became lecturer. Services were disrupted, and he was insulted in the streets. Simeon remained there for the rest of his life, eventually with a crowded church.

Simeon died, unmarried, on 13 November 1836, and was buried on 19 November in King's College Chapel, Cambridge. His memorial by Humphrey Hopper in Holy Trinity, Cambridge, was described by architectural critic Nikolaus Pevsner as an "epitaph in Gothic forms." 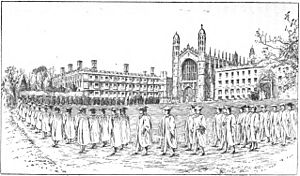 Simeon gained influence among the undergraduates of the university. He became a leader among evangelical churchmen, and was one of the founders of the Church Missionary Society in 1799. He also helped found the London Society for Promoting Christianity Amongst the Jews (now known as the Church's Ministry Among Jewish People or CMJ) in 1809, and acted as adviser to the British East India Company in the choice of chaplains for India.

According to the historian Thomas Macaulay, Simeon's "authority and influence … extended from Cambridge to the most remote corners of England, … his real sway in the Church was far greater than that of any primate."

In 1792 Simeon read An Essay on the Composition of a Sermon by the French Reformed minister Jean Claude. Simeon found that their principles were identical and used the essay as the basis for his lectures on sermon composition. Claude’s essay also inspired Simeon to make clear his own theological position. He published hundreds of sermons and sermon outlines (called "sermon skeletons"), still in print, that to some were an invitation to clerical plagiarism. His chief work is a commentary on the whole Bible, entitled Horae homileticae (London).

He established a trust for the purpose of acquiring church patronage to perpetuate evangelical clergy in Church of England parishes. It arose from the bequest of John Thornton, who died in 1813, of ten advowsons, left to a trust, of which Simeon was one of the trustees. Simeon expanded the group of livings with money he had inherited. The Simeon's Trustees are responsible for the patronage (or a share of the patronage) in over 160 Church of England parishes.

All content from Kiddle encyclopedia articles (including the article images and facts) can be freely used under Attribution-ShareAlike license, unless stated otherwise. Cite this article:
Charles Simeon Facts for Kids. Kiddle Encyclopedia.