Charles Village is a neighborhood located in the north-central area of Baltimore, Maryland, USA. It is a middle-class area with many single-family homes that is in proximity to many of Baltimore's urban amenities. The neighborhood began in 1869 when 50 acres (200,000 m2) of land were purchased for development. The land was divided and turned over to various builders who constructed home exteriors, leaving the interiors to be custom built according to buyer specifications. The area was first developed as a streetcar suburb in the early 20th century, and is thought to be the first community to employ tract housing tactics. At the time, the area was known as Peabody Heights; the moniker Charles Village, derived from Charles Street, the area's major north-south corridor, was coined in the 1970s as the beginning of a process of conceptually grouping a large and somewhat heterogeneous area. The neighborhood history has been researched and published by Gregory J. Alexander and Paul K. Williams in their book Charles Village: A Brief History (The History Press, 2009).

Charles Village in a strict sense consists of the area immediately to the east and south of the Johns Hopkins University Homewood campus. However, smaller neighborhoods to the east of this area — including Abell and Harwood, are considered by residents and other Baltimoreans to be part of Greater Charles Village. The Charles Village Community Benefits District (CVCBD) covers a hundred-block area generally bounded by 33rd Street to the north, Greenmount Avenue to the east, 25th Street (east of Guilford) and 20th Street (west of Guilford) to the south, and Johns Hopkins and Howard Street to the west. This area contains over 14,000 people and 700 businesses. The Charles Village Community Benefits District Management Authority (CVCBDMA) is a public entity that provides services within the CVCBD.

The neighborhood includes several small commercial districts and is within walking distance to the well-attended Waverly farmer's market. However, unlike many of the trendier neighborhoods in the city, there are few large-scale retail areas. That is in the process of changing, however, as two blocks of St. Paul Street in the northern part of the neighborhood have been completely redeveloped. On October 21, 2006, the first phase of a new development project was completed: a Barnes & Noble bookstore opened as an anchor to the retail space of a new dorm building, called Charles Commons, for Hopkins students. The project, completed in 2007, converted a stretch of rowhouses and small apartment buildings to the 600+ capacity dorm as well as multi-story condominiums, all of which contain ground-floor retail. The Barnes & Noble now serves both as the Johns Hopkins student bookstore and as a standard retail outlet for residents of North Baltimore City.

There is a small portion of lower Charles Village that is sometimes referred to as Koreatown or Little Korea and is home to a number of Korean restaurants, but it has not been officially designated as a Koreatown. This informal Koreatown is bound on the north by 24th Street, on the south by North Avenue, on the west by Maryland Avenue, and on the east by St. Paul Street. 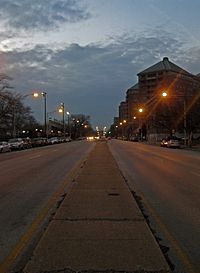 MTA Maryland's Route 11 and Route 3 buses are the two major mass transportation options in Charles Village, while Route 8 runs down Greenmount Avenue, just to the East of the neighborhood. Route 61 and Route 64 buses, which are weekday-only buses intended primarily for commuters, also travel through the area. As of October 2015, the Charm City Circulator now serves Charles Village on St. Paul St. and Charles St. through 33rd St. Charles Village is not served by either of Baltimore's rapid transit systems.

Charles and Saint Paul Streets, two one-way streets that together comprise one of central Baltimore's main north-south corridors, pass through the middle of Charles Village; two other major corridors, Howard Street and Greenmount Avenue, bound the neighborhood on the west and east, respectively. The area is also only a short drive from the Jones Falls Expressway (I-83).

All content from Kiddle encyclopedia articles (including the article images and facts) can be freely used under Attribution-ShareAlike license, unless stated otherwise. Cite this article:
Charles Village, Baltimore Facts for Kids. Kiddle Encyclopedia.