The Chattanooga Choo-Choo Hotel (formerly known as Terminal Station) in Chattanooga, Tennessee, is a former railroad station once owned and operated by the Southern Railway. Listed on the National Register of Historic Places, the station is currently operated as a hotel, and is a member of Historic Hotels of America, part of the National Trust for Historic Preservation. 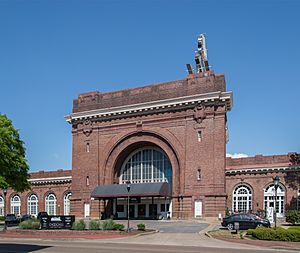 The original Chattanooga Union Station was built in 1858 (demolished in 1973). Plans for a new station originally called for a smaller facility to handle supplies and small packages. Instead, it was decided to build a grand station to handle passengers as well. Construction on this Terminal Station began in 1906; it was opened in 1909 at the total cost of $1.5 million.

It even greeted presidents such as Woodrow Wilson, Franklin D. Roosevelt, and Theodore Roosevelt.

American railroad passenger traffic declined after World War II; the Southern's express Detroit-Cincinnati-Florida Florida Sunbeam ended service in 1949. Traffic fell even more so in the 1950s and 1960s, due to competition from better cars and interstate systems, along with airplanes becoming a more popular way to travel and ship items. Packages and land shipping became easier to send and the train track locations became outdated.

Terminal Station hosted its last passenger train to visit and serve the station, the Southern Railway's Birmingham Special, from New York City to Birmingham, and this train left Terminal Station in 1970, which is the same year the doors of Terminal Station finally closed to the public. (Other noteworthy trains serving the station in its last years were the Southern Railway's Pelican [New York-New Orleans], Ponce de Leon [Cincinnati-Jacksonville, FL], Royal Palm [Cincinnati-Miami] and Tennessean [Memphis-Washington, D.C.]) In the years before, as the passenger traffic declined, most of the platforms started to become storage before the station eventually got changed into a hotel and one by one, each track ultimately became obsolete. 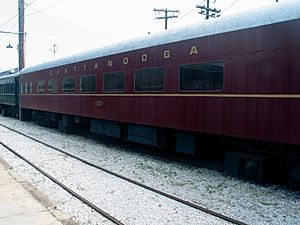 A restored passenger railway car at the Choo-Choo

The 24-acre (97,000 m2) complex is a convention center, hotel and resort with restaurants and shops. Hotel guests can stay in restored passenger railway cars.

The train tracks have mostly been removed to accommodate the growth of the city. The modern Chattanooga Choo Choo Hotel is adorned with a bright neon miniature sign version of the trains that once visited. The hotel is surrounded and fenced in by rose gardens and includes an additional area for educational historic trolley rides as well as an ice skating rink. It also once featured the "Dinner in the Diner" restaurant, which is no longer operating. Some parts of the complex were connected by a heritage streetcar line, operated by a 1924-built ex-New Orleans Perley Thomas trolley car; this has been discontinued. 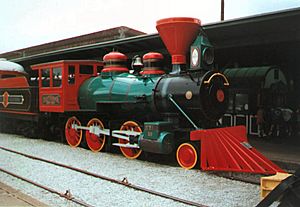 The Beaux-Arts-style station designed by Donn Barber was one of the grandest buildings in Chattanooga, featuring an arched main entrance. The building also has an 82-foot (25 m) high ceiling dome with a skylight in the center section. The station included a main waiting room, bathrooms, ticket offices, and other services ready to help potential passengers. The original Terminal Station was merely one story in height, so the aforementioned dome and skylight made this area look gargantuan in juxtaposition to other similar buildings, while the arched main entrance was said to be the "largest arch in the world." Lighting was provided by large brass chandeliers. Terminal Station had fourteen train tracks, that could serve seven different passenger platforms. The then president of the Southern Railway System, William Finley, wanted the architecture to follow the example of and imitate the looks of the National Park Bank of New York, and the high dome-like skylight was the main emulation of the National Park Bank.

The 1941 Glenn Miller song "Chattanooga Choo Choo" told the story of a train trip from Track 29 at Pennsylvania Station in New York City through Baltimore, North and South Carolina, and finishing the trip, or terminating at Terminal Station. (However, no such train went from New York, through the Carolinas to Chattanooga.)

All content from Kiddle encyclopedia articles (including the article images and facts) can be freely used under Attribution-ShareAlike license, unless stated otherwise. Cite this article:
Chattanooga Choo-Choo Hotel Facts for Kids. Kiddle Encyclopedia.