Chauchilla Cemetery is a cemetery that has prehistoric remains of prehispanics. Their bodies, which are mummified, contain artifacts. The cemetery is 30 kilometres (19 mi) south of the city of Nazca in Peru. 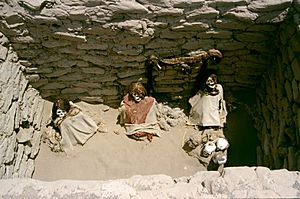 The tombs were built for families.

Preservation of the bodies

The bodies inside the cemetery have been preserved which is probably because of the dry climate in the Peruvian Desert. However, the funeral rites were also an important factor. The bodies had clothes on them which were made of cotton and were painted with a resin. They were bought in the cemetery, which was built from mud bricks. The resin was thought to have kept out insects and slowed bacteria from feeding on the bodies.

Estaquería, a nearby cemetery, may have given clues to show how the bodies were preserved. At Estaquería, archaeologists have found wooden pillars which was first thought to have been used for astronomical sightings. However, it is not thought that those posts were used to dry the bodies. This was a mummification process. This clue helped archaeologists to understand why these thousand-year-old bodies still had their hair and some soft tissue, like skin, still attached to them.

All content from Kiddle encyclopedia articles (including the article images and facts) can be freely used under Attribution-ShareAlike license, unless stated otherwise. Cite this article:
Chauchilla Cemetery Facts for Kids. Kiddle Encyclopedia.