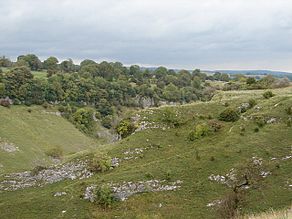 Chee Dale from A6 road

Chee Dale is a steep-sided gorge on the River Wye near Buxton, Derbyshire, in the Peak District of England.

Chee Dale has a protected nature reserve (close to the village of Wormhill), which is overseen by the Derbyshire Wildlife Trust. The reserve contains ash, yew and rock whitebeam woodland on the cliff sides and abundant wild flowers including cowslips, early purple orchids, rock rose and the rare Jacob's ladder. Dippers are often seen darting low above the river and bobbing on rocks in the river. Other birds nesting in the valley include blackcap, chiffchaff and willow warbler. Chee Dale is part of the Wye Valley Site of Special Scientific Interest (SSSI), running for 15 kilometres (9.3 mi) east of Buxton. 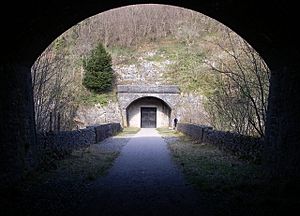 The Monsal Trail bridleway runs for 8.5 miles (13.7 km) from Topley Pike Junction (at the head of Chee Dale) to Rowsley near Bakewell, along the disused Manchester, Buxton, Matlock and Midlands Junction Railway line. It passes through Upper Chee Dale and then enters Chee Tor Tunnels 1 and 2 through to Miller's Dale.

There is also a riverside footpath along the length of Chee Dale with several wooden footbridges over the river. Sets of stepping stones allow walkers to pass the foot of the cliffs.

The crags of carboniferous limestone in Upper Chee Dale and of Chee Tor cliff in Lower Chee Dale have extensive rock climbing routes.

At the head of Chee Dale it joins Great Rocks Dale to the north, at the former railway stations of Blackwell Mill and Chee Dale Halt. Great Rocks Dale is a dry valley and is the site of Tunstead Quarry, one of the largest limestone quarries in the UK.

The Pennine Bridleway crosses the River Wye over a footbridge at Blackwell Mill.

Access into the deep gorge is limited. Miller's Dale car park is the obvious place for visitors to get into Chee Dale. At the west end of Chee Dale there is Topley Pike layby with limited parking by the A6 road. There is also a short steep footpath into Chee Dale from Wormhill.

All content from Kiddle encyclopedia articles (including the article images and facts) can be freely used under Attribution-ShareAlike license, unless stated otherwise. Cite this article:
Chee Dale Facts for Kids. Kiddle Encyclopedia.