New Zealand Sugar Company Limited is a long-established business and landmark in Birkenhead, New Zealand, located on the northern shore of Auckland's Waitemata Harbour. The company is also known colloquially as "Chelsea Sugar", taking reference from the company's branded sugar "Chelsea", and the site is also colloquially known as the "Chelsea Sugar Refinery", or "sugar works".

The refinery was established in 1884, and remains New Zealand's main source of sugar products (for both home use and for the food and beverage industry). This position remained even after New Zealand's deregulation opened the markets in the 1980s to foreign competition, and products are also exported overseas. The refinery also has one of Auckland's deepwater ports, with handysize ships importing raw sugar globally every six weeks.

Throughout most of the 19th century, all sugar products in New Zealand had to be imported; wishing to improve New Zealand's self-sufficiency, in 1882 the government offered a bounty to the first company to produce sugar locally. Already interested in business prospects in New Zealand, the Australian Colonial Sugar Refining Company had investigated possible sites in New Zealand and purchased 160 acres (0.65 km2) of farm land in Birkenhead. This was later expanded to 450 acres (1.8 km2).

The site was ideal for a refinery: the Waitemata offered deep water close to shore for a port, and fresh water from Duck Creek, which ran through the estate, and land and timber for building purposes were plentiful.

The name "Chelsea" was bestowed on the site by the refinery's first customs officer, who named it after Chelsea in England, his hometown. 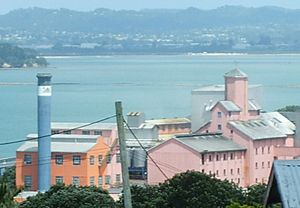 The original 1884 building, seen here on the right, is still used today, and forms the basis for the company logo.

Work began on the new refinery in 1883, when 150 workers levelled the ground, reclaimed a natural lagoon, built wharves (by blasting bedrock), and created dams using two-thirds of the 1.5 million bricks which were made on site; the remainder were used in the buildings. By 1884, the refinery was operating, and has not ceased its 24-hour operation since.

Of the 150 workers who built the refinery, 100 remained to work in it once it was complete; most had migrated from Auckland and settled in the area.

Some of the early machinery and equipment was imported from Greenock in Scotland; much of this historic equipment remains on site, providing a rich industrial heritage. 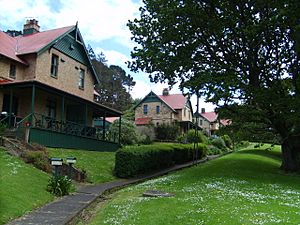 Built in 1909, the row of brick workers' cottages are little changed today.

As work on the refinery began, the managers and company officers were able to adapt the existing farm cottages on the estate for their use, but the majority of workers lived in tents and temporary dwellings near the building site. This shanty town was replaced by Chelsea Village, which consisted of 35 cottages provided by the company within the grounds, some distance from the existing Birkenhead village. Planned to be a model town, it provided gardens, a church, reading room, school, and shop.

However, the village did not remain for many years; the lower houses suffered from dampness and were unoccupied by the early 1890s, and by 1900 it was known as the "barracks" and occupied mainly by single men. In 1905, the village was condemned by the health authorities and the worst of the houses were demolished; the rest were sold and shifted from the site. Some of the relocated cottages can still be seen in the older streets around Birkenhead, and the church, now known as St Peters, was moved to Verrans Corner (a local suburb).

Desiring its core tradesmen to remain on site, in case of emergencies, the company built four semi-detached brick houses in 1909 on the site of the old Chelsea Village. These houses remain in Chelsea's ownership, but are now rented to private individuals. For the remaining workers, the company offered inexpensive housing loans, which financed the building of over a third of Birkenhead's new houses between 1910 and 1926, mainly in the streets surrounding the refinery, including Colonial Road (named after the original sugar company) and Huka Road (after the Maori name for sugar).

Renowned poet James K Baxter worked at Chelsea as a cleaner in 1969-a job found for him by Hone Tuwhare. Dismissed after three weeks, he wrote the satirical poem "Ballad of the Stonegut Sugar Works" which expressed his unhappiness at the working conditions. Baxter's impression of the factory was not shared by all workers; it was recognised as a place of hard work, but the community spirit was high and the company provided many benefits for workers. The company housing loans and secure employment ensured long service, often complete generations from the same families all working at the refinery.

Second port on the Waitemata 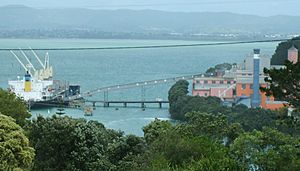 The site was chosen due to the deepwater access, allowing a port to be built in 1884. Raw sugar came from Fiji, Cuba, Australia, Indonesia, and Peru for refining, and until the building of the Auckland Harbour Bridge, the finished products were shipped out from the wharf. All other commodities, such as coal, food, and mail, were also handled by Chelsea Wharf.

This port continues to accept ships, generally handysize bulk carriers, delivering up to 30,000 tons of raw sugar. It remains private, but arrivals at the port are recorded by the Ports of Auckland and subject to Customs and MAF regulations. As the ships generally exceed 500 gross register tons (GRT), the ships require pilotage, managed by the Ports of Auckland's Harbour Control.

Some of the land was in the ownership of the Ports of Auckland, and leased to Chelsea. In 1997, approval was granted for Chelsea to purchase the land, a total of nine hectares.

The port is located up-harbour from the Harbour Bridge, thus enforcing a large central span (243.8 m) and height (43.27 m at high tide). 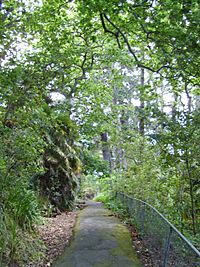 One of the footpaths leading through the grounds

Chelsea is more than a landmark on the coast; it has been central to the development of the local community and remains active in preserving and encouraging interest in the local heritage and local events, sponsoring things as diverse as school trails and the publication of local histories.

As part of the company's interest in preserving its early heritage for later generations, it has entrusted its archives to the Birkenhead Public Library. These Chelsea Archives contain company records, including wage books, legal files, and share registers from throughout its history.

The architectural and social importance of the site is recognised by Heritage New Zealand. The early factory buildings, manager's house, and brick houses have Category II listings, and the site as a whole is recognised for its industrial heritage. As one of the largest complexes in New Zealand, and one of the few refineries in the South Pacific, it helped to established New Zealand as an economic force.

Throughout its history, Chelsea has allowed the public open access to its significant grounds, which comprise wetlands, lakes, open space, and bush. To ensure the parkland -and its access- is maintained, has become a public legacy.

Among the other cultural impacts which the refinery has had on its surrounds is the origin of top local association football team Glenfield Rovers. The club, founded as Chelsea F.C. in 1960, was originally a social club for staff at the refinery. It later became more than just a social side, and has among the strongest teams in the Auckland region since the mid-1990s. The club reached the semifinals of the national Chatham Cup competition in 2008. 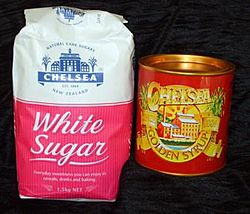 The current Golden Syrup tin displays an illustration of the 19th-century refinery, a design reflected in the company logo shown on the White Sugar packaging.

Chelsea operates 24 hours a day, 5 days per week, and remains New Zealand's market leader in sugar products. Chelsea purchases bulk raw sugar globally, which is brought in by ship and processed and packaged at the Refinery. Sales offices and warehouses around the country aid in the distribution of 200,000 tonnes of sugar a year, supplying both retail and manufacturing markets. About 20% of Chelsea's total production is exported, mainly to Australia and the Pacific. New Zealand has a deregulated economy, hence it has no subsidies or import tariffs for sugar, so Chelsea operates entirely within the free market.

Chelsea provide financial support and sponsorship for a variety of organisations and projects within the local community. They also provide funding for the Sugar Research Advisory Service, an independent organisation undertaking and reviewing research into sugar.

All content from Kiddle encyclopedia articles (including the article images and facts) can be freely used under Attribution-ShareAlike license, unless stated otherwise. Cite this article:
Chelsea Sugar Refinery Facts for Kids. Kiddle Encyclopedia.