Chesapeake Beach, also known as Chic's Beach or Chick's Beach is a small beach in a residential neighborhood running on the east and west sides of the Chesapeake Bay Bridge Tunnel in Virginia Beach, Virginia, United States. What originated as a lookout post during war, the beach eventually turned to more recreational activities. The area developed in the early 1900s as a beachfront residential community. Chic's was a place where you could pick up limeade and an ice cream. Eventually, this site became what is now Buoy 44 Restaurant. The terms Chic's and Chick's Beach have stuck. It is a diverse area consisting of beach cottages, condominiums, townhouses, duplexes, apartments, and single-family homes. The beach community is bordered on the south by Shore Drive. Shore Drive is one of the corridors leading to the tourist destination of the Virginia Beach oceanfront and is currently undergoing many improvements to the biking and jogging trails. Little Creek Naval Amphibious Base caps the west side of this community, merging longer stretches of undeveloped, protected beaches which harbor dolphin and other marine life. 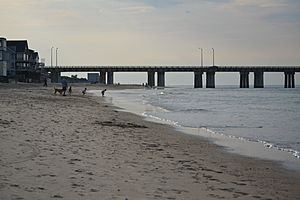 Chesapeake Beach at sunset, with the Chesapeake Bay Bridge-Tunnel in the background

Also famous in this little stretch was the "Pleasure House" ... where the partiers of olden days gathered for gossiping, gambling and whatever. This is also where the longest bay-bridge connects to the Eastern Shore, across the Chesapeake Bay (Chesapeake Bay-Bridge Tunnel).

The residents of this community enjoy less public traffic due to restricted parking and relatively less renowned than other area beaches. The favorite activities of these neighborhoods include boating the four lakes winding through the area, jet skiing, kayaking, stand up paddleboarding, walking the beach and sailing on the Bay, and the kids engage hours of skateboarding, skimboarding and creating sand-castles.

All content from Kiddle encyclopedia articles (including the article images and facts) can be freely used under Attribution-ShareAlike license, unless stated otherwise. Cite this article:
Chesapeake Beach, Virginia Facts for Kids. Kiddle Encyclopedia.