Chesterfield is a ghost town in Caribou County, Idaho, United States. It is located in Gem Valley at an elevation of 5,446 feet (1,660 m). The community includes a cemetery and former buildings of The Church of Jesus Christ of Latter-day Saints (LDS Church) such as a former meeting house, amusement hall and tithing house.

Located along a route of the Oregon Trail, Chesterfield was founded by Mormon settlers in 1881. After a railroad line was built through Bancroft to the south, the community lost some of its momentum, and agricultural difficulties led to its desertion by the end of the 1930s. Today, the community is operated as a tourist attraction, with guided tours and a museum.

In 1980, the community was listed on the National Register of Historic Places as a historic district and is also on the Mormon Historic Sites Foundation's Mormon Historic Sites Registry. The historic district includes 41 buildings and eight sites, spread out over an area of 2,160 acres (870 ha). Some buildings in the district are examples of the Greek Revival and Queen Anne architectural styles. 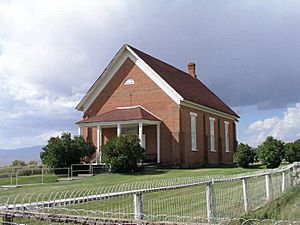 In 1879, Chester Call and his niece’s husband, Christian Nelson, established a horse ranch in the area. Thinking this might be a good area in which to live, Chester Call told his family and friends about the area and they decided to come and settle in 1881 and 1882. Chesterfield's first settlers built their homes in the river bottom of the Portneuf River, west of present-day Chesterfield. Unlike typical Mormon settlements, which were founded by settlers sent by LDS Church authorities, the community was founded spontaneously by its first settlers. and not set up in the typical compact, grid patterned townsite. Also in 1881, the Union Pacific Railroad started to construct the Oregon Short Line Railroad to the south of Chesterfield, running through present-day Bancroft. The new settlers sold logs and railroad ties to the railroad, raising much needed cash.

In 1883, LDS Church authorities visited the area to establish a branch. While there, the visiting leaders asked their members to organize into a central village, away from the Portneuf River flood plain. The current Chesterfield townsite was chosen up along the foothills. As in traditional Mormon towns, Chesterfield was laid out in a grid pattern, consisting of thirty-five ten-acre blocks. By 1890, the LDS meetinghouse and a store were the only buildings on the townsite as a mistake in the government survey kept the land off the market for a time.

The LDS Meetinghouse is the most prominent and best preserved building in Chesterfield. It was built between 1887 and 1892. 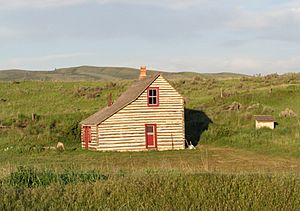 The Nathan Barlow House, built about 1900, was the home of the postmaster and owner of the general store. After the Panic of 1907 and the harsh winter of 1907-1908, Nathan Barlow lost all of his money and moved out of the community. The home was restored in 2009, with descendants of Nathan Barlow contributing the furnishings.

The Ira Call cabin is a saltbox style home. It contained two polygamous families for a short time.

Aunt Ruth Call David's cabin built of red pine logs with a dirt floor in 1881 and 1882. Aunt Ruth was a Native American who was adopted by Chester Call's parents in the 1860s. As the town's midwife, she delivered most of the babies.

All content from Kiddle encyclopedia articles (including the article images and facts) can be freely used under Attribution-ShareAlike license, unless stated otherwise. Cite this article:
Chesterfield, Idaho Facts for Kids. Kiddle Encyclopedia.