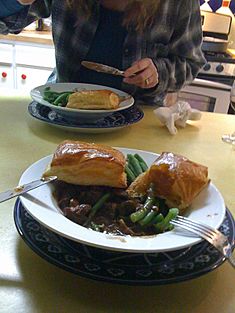 Chestnut pie is a pie prepared with chestnuts as a primary ingredient. It is a part of the cuisine of Italy, where it has been documented as dating back to the 15th century. It is also a part of the cuisine of the Southern United States. Shelled whole or chopped chestnuts may be used, which may be boiled or roasted. A chestnut purée may also be used. It may be prepared as a savory or sweet pie.

Chestnut pie has been documented back to the 15th century in Italy, in the book De honesta voluptate et valetudine ("On honourable pleasure and health") written by the Italian writer and gastronomist Bartolomeo Platina. Platina's recipe, titled torta ex castaneís, called for the use of boiled and ground chestnuts in the pie. The chestnuts were ground using a mortar and pestle, milk was added and then the mixture was strained. After this step, the ingredients for a spelt tart were added. The use of saffron was recommended to add coloration to the dish.

In the 16th century, the pie was prepared and documented by Bartolomeo Scappi in his 1570 book Opera dell'arte del cucinare, which was focused upon Italian Renaissance cuisine. The recipe included the use of dried and fresh chestnuts in the pie. Scappi's recipe recommended using chestnuts that were not entirely ripened, gathered in August.

An 1858 recipe for sweet chestnut pie uses chestnuts glazed with orange flowers, in the dish's preparation, which are placed inside the pie.

Savory chestnut pie may be prepared with various additional ingredients such as mushrooms, garlic onion, celery, leeks and butternut squash, among others. A 1915 recipe uses boiled and shelled chestnuts, canned mushrooms, a white sauce and a biscuit dough in preparation of the dish.

All content from Kiddle encyclopedia articles (including the article images and facts) can be freely used under Attribution-ShareAlike license, unless stated otherwise. Cite this article:
Chestnut pie Facts for Kids. Kiddle Encyclopedia.