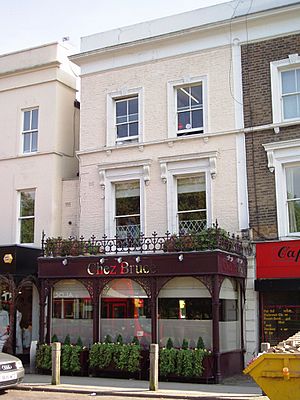 Chez Bruce is a restaurant located at 2 Bellevue Road in Wandsworth, London, England. The restaurant was opened in February, 1995 by Bruce Poole and his business partner Nigel Platts-Martin.

Platts-Martin is proprietor of several other London restaurants including: La Trompette in Chiswick, The Glasshouse in Kew, The Ledbury in Notting Hill and The Square in Mayfair.

Chez Bruce occupies the site of former Marco Pierre White restaurant, Harveys. As a young chef, Gordon Ramsay worked under White at Harveys but left to pursue an independent career.

In 2006, Chez Bruce was first named as "Londoners' Favourite Restaurant" in a survey conducted for Harden's London Restaurants, a title which The Ivy had held for the past nine years. [1]. Chez Bruce has since been top of the list as London's favorite restaurant for four consecutive years.

All content from Kiddle encyclopedia articles (including the article images and facts) can be freely used under Attribution-ShareAlike license, unless stated otherwise. Cite this article:
Chez Bruce Facts for Kids. Kiddle Encyclopedia.