Chickies Ridge is a long ridge in West Hempfield Township, Lancaster County, Pennsylvania, terminating at the west end in an outcropping overlooking the Susquehanna River, known as Chickies Rock.

Part of an eastward extension of the Hellam Hills, Chickies Ridge has been separated from them by a water gap cut by the Susquehanna. The ridge is composed of uplifted Cambrian Chickies Formation, which extends several miles east before merging into the surrounding uplands. Chickies Rock, at the west end overlooking the river, is the largest exposed anticline on the East Coast. According to the USGS, the summit of the ridge is 587 feet (179 m) above sea level.

The name of the creek comes from the Lenape "Chiquesalunga", meaning "place of crayfish".

Chickies Hill Road appears to have been the earliest road over the ridge, switchbacking across the middle and making a steep descent down the northern side on the way from Columbia to Marietta.

During the Gettysburg Campaign of the American Civil War, Chickies Rock served as a Union army observation post during the Confederate occupation of Wrightsville across the river.

The Columbia and Donegal Electric Railway built tracks up the side of the ridge from Columbia in 1893. The railway climbed for 1,900 feet (580 m) on a 6% grade, running on the west side of Chickies Hill Road and then curving sharply west to reach Chickies Park. This was an amusement park built by the trolley company on the west end of the ridge, atop Chickies Rock, overlooking the Susquehanna. The line to the park was opened on July 1, 1893. It was then extended down the north side of the ridge, running westward about 0.5 miles (0.80 km), rounding a tight horsehoe curve and turning eastward, to cross Chickies Creek at the base of the ridge and run to Marietta. This extension was opened on December 31, 1893. The trolley line was abandoned on April 25, 1932. 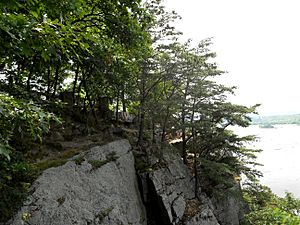 View of the cliffs at Chickies Rock, Lancaster County, Pennsylvania

Pennsylvania Route 441 once followed Chickies Hill Road, but a later realignment brought it directly through the western part of Chickies Ridge in a deep cut, substantially reducing the climb.

The Pennsylvania Canal, the Columbia Branch and then the Atglen and Susquehanna Branch of the Pennsylvania Railroad all at different times squeezed between Chickies Rock and the river. All but the last are now abandoned.

A variation of Shakespeare's Romeo and Juliet is told, with an Indian Maiden replacing Juliet and a white settler as Romeo. Eventually, the settler is killed in a war over the maiden, who throws herself off Chickies Rock. 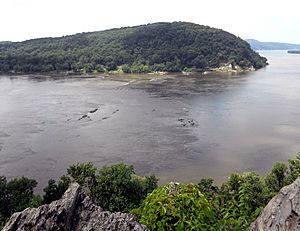 Chickies Rock is a host site for one of the rarest of eastern U.S. ferns, Bradley's spleenwort.

All content from Kiddle encyclopedia articles (including the article images and facts) can be freely used under Attribution-ShareAlike license, unless stated otherwise. Cite this article:
Chickies Ridge Facts for Kids. Kiddle Encyclopedia.