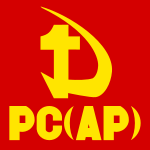 The party believes in classical Marxism–Leninism. The party is highly critical of the more known Communist Party of Chile and its moderate views.

The party has no parliamentary representation due to their non-registered status.

All content from Kiddle encyclopedia articles (including the article images and facts) can be freely used under Attribution-ShareAlike license, unless stated otherwise. Cite this article:
Chilean Communist Party (Proletarian Action) Facts for Kids. Kiddle Encyclopedia.