Born in Norwich, Miéville was brought up in Willesden and has lived in London since early childhood. He grew up with his sister Jemima and mother Claudia, a translator, writer and teacher. His parents separated soon after his birth. He has said that he "never really knew" his father. They chose his first name, China, from a dictionary, looking for a beautiful name. Because his mother was born in New York City, Miéville is an American and British citizen.

Miéville studied at Oakham School, a co-educational independent school in Oakham, Rutland, for two years. At the age of eighteen, in 1990, he taught English for a year in Egypt, where he developed an interest in Arab culture and in Middle Eastern politics.

Miéville studied for a BA degree in social anthropology at Clare College, Cambridge. He graduated in 1994. He next earned a master's degree and then a PhD in international relations from the London School of Economics in 2001. Miéville has also held a Frank Knox fellowship at Harvard University. After becoming dissatisfied with the ability of post-modern theories to explain history and political events, he became a Marxist at university. A book version of his PhD thesis, Between Equal Rights: A Marxist Theory of International Law, was published in the UK in 2005 by Brill in their "Historical Materialism" series, and in the United States in 2006 by Haymarket Books.

Miéville has been a member of the International Socialist Organization (US) and, until 13 March 2013, was also a member of the Socialist Workers Party (UK). He stood for the House of Commons of the United Kingdom in the 2001 general election as a candidate for the Socialist Alliance. He did not win. He got 459 votes, or 1.2%, in Regent's Park and Kensington North, a Labour constituency. 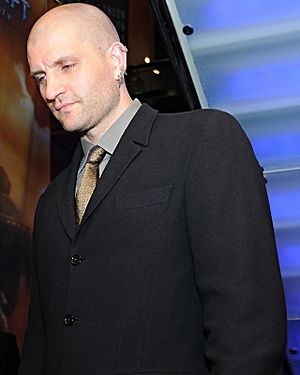 Miéville just after winning the Arthur C. Clarke Award in 2010

All content from Kiddle encyclopedia articles (including the article images and facts) can be freely used under Attribution-ShareAlike license, unless stated otherwise. Cite this article:
China Miéville Facts for Kids. Kiddle Encyclopedia.