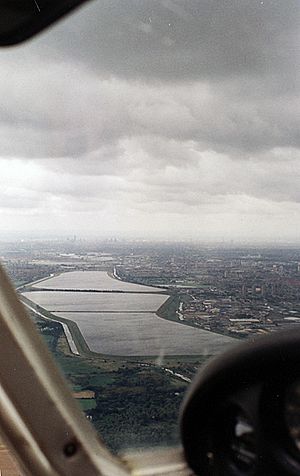 The reservoirs are a 391.3 hectare biological Site of Special Scientific Interest, of which 316.3 hectares are in London and 75 hectares in Essex. They are comparatively shallow and provide open water habitat for wildfowl, gulls and waders.

The reservoirs are major wintering grounds for wildfowl, including nationally important populations of shovelers and great crested grebes. They also attract significant numbers of goldeneye ducks, tufted ducks and goosanders. The reservoirs are also one of the capital's main roosting site for gulls; 70,000 of these have been recorded at one time, the majority being black-headed gulls, common gulls, lesser black-backed gulls and herring gulls.

Since the 1950s, the reservoirs have been providing a refuge for wildfowl while they are vulnerable during the late summer moult, and in some years, moulting flocks of great crested grebe have also used the reservoirs as a refuge. The reservoirs have also been used by migratory birds as a stopover site in autumn and spring, and yellow wagtail regularly breed here. A total of over 85 species of wetlands birds have been recorded at the site.

All content from Kiddle encyclopedia articles (including the article images and facts) can be freely used under Attribution-ShareAlike license, unless stated otherwise. Cite this article:
Chingford Reservoirs Facts for Kids. Kiddle Encyclopedia.