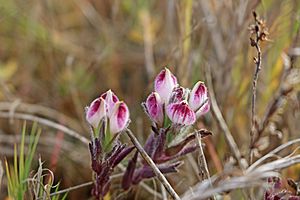 Chloropyron maritimum is a rare species of flowering plant in the family Orobanchaceae known by the common names salt marsh bird's beak and Point Reyes bird's beak, depending on the specific subspecies. It was formerly classified as Cordylanthus maritimus.

It is native to the Southwestern United States and northern Baja California. This is a halophyte which grows in areas of high salt concentrations, including coastal salt marshes and the inland salt flats of the Great Basin. It is hemiparasitic, such that it is greenish and has chlorophyll but also parasitizes other plants by inserting haustoria into their roots to tap nutrients.

This plant grows in low clumps and has small, thick, gray-green hairy leaves often tinted with purple. It concentrates and excretes salts, giving its foliage a grainy crust. It erects an inflorescence several centimeters high which has many fuzz-covered white or cream club-shaped flowers with yellow or purplish tips. The fruit is a capsule containing many brown net-textured (reticulate) seeds.

All content from Kiddle encyclopedia articles (including the article images and facts) can be freely used under Attribution-ShareAlike license, unless stated otherwise. Cite this article:
Chloropyron maritimum Facts for Kids. Kiddle Encyclopedia.