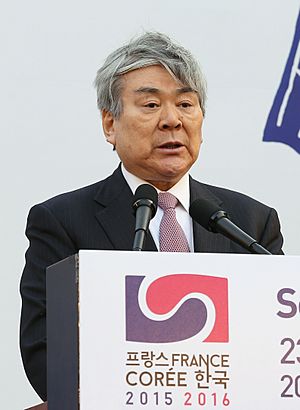 Cho Yang-ho (Korean: 조양호; 8 March 1949 – 7 April 2019), also known as Y. H. Cho, was a South Korean businessman. He was the chairman and chief executive officer (CEO) of Korean Air, South Korea's flag carrier and largest airline. He served as chairman of the Hanjin Group. He was also a founding member of the SkyTeam airline alliance. He was born in Incheon, Gyeonggi.

Cho died on 7 April 2019 after an illness in Los Angeles, California, United States. He was 70.

All content from Kiddle encyclopedia articles (including the article images and facts) can be freely used under Attribution-ShareAlike license, unless stated otherwise. Cite this article:
Cho Yang-ho Facts for Kids. Kiddle Encyclopedia.