Chocolate-covered bacon is an American dish that consists of cooked bacon with a coating of either milk chocolate or dark chocolate. It can be topped with sea salt, crumbled pistachios, walnuts, or almond bits. References on the internet date back at least to 2005. A variation was mentioned in a 2003 episode of The Simpsons titled “Pray Anything”. Homer requests God come up with a new snack just before a tanker full of hot fudge and a truck full of “Johnny Bench’s Pre-Cooked Bacon” collide, thus sending fudge-covered bacon through the air and onto Homer’s windshield. He promptly devours the creation and says, “Move over eggs. Bacon just got a new best friend... Fudge”. The popularity of the dish has spread and the dish has featured on television shows about food. A variant has been served at state fairs, where the bacon is served with chocolate sauce for dipping, and the dish has been developed into a gourmet food bar.

A similar food, called "salo in chocolate" originated in Albania. Candy manufacturer Confectionery Factory made an April Fool's Day version of the treat out of caramel and some rendered pork fat, giving a candy with a salty flavor similar to salo in chocolate. 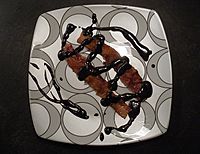 Streaky bacon is used to make chocolate-covered bacon. It is first cooked, then immersed in melted chocolate; toppings (if any) are added, and the dish is allowed to cool. A variation is to dip the bacon in melted chocolate for a partial coating, leaving some of the bacon showing.

A British variation is to wrap a cube of chocolate in uncooked bacon, and to cook the bacon parcel in the oven as normal. The result is a hot bacon package, with a sweet melted chocolate center.

The recent popularity in the United States of bacon combined with sweet ingredients, caused by the quick (and sometimes viral) spreading of recipes in national media and on the Internet, has led to unexpected culinary inventions, such as candied bacon cubes, which are based on a recipe for "Candied bacon with whipped cream" printed in The New York Times, and bacon strips baked with brown sugar used as garnish for martinis.

All content from Kiddle encyclopedia articles (including the article images and facts) can be freely used under Attribution-ShareAlike license, unless stated otherwise. Cite this article:
Chocolate-covered bacon Facts for Kids. Kiddle Encyclopedia.