His parents were farmers and poor. When he was seventeen year old, he left school to work. One year later, he saw a TV station advertisement about some actors, so he decided to apply and was asked to go for an audition.

Chow then started acting, but at first he could only act in some minor roles. From 1975 to 1995 Chow acted in 70 movies. When he finished the movie called "Peace Hotel", he left Hong Kong and went to Hollywood. In Hollywood, the first movie he acted in was "Replacement Killers". Then he acted in some movies like "Anna & the King". 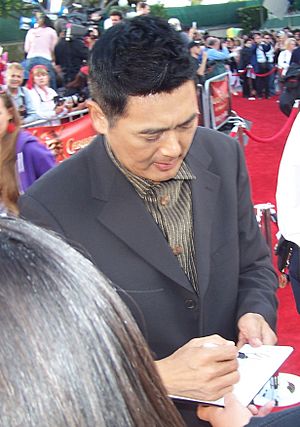 All content from Kiddle encyclopedia articles (including the article images and facts) can be freely used under Attribution-ShareAlike license, unless stated otherwise. Cite this article:
Chow Yun-Fat Facts for Kids. Kiddle Encyclopedia.