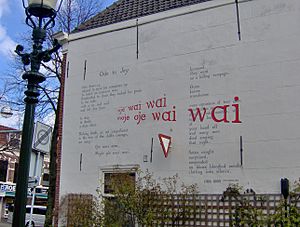 Christopher Abani (born 27 December 1966) is a Nigerian-American author. He says he is part of a new generation of Nigerian writers working to convey to an English-speaking audience the experience of those born and raised in "that troubled African nation".

Abani was born in Afikpo, Nigeria. His father was Igbo, while his mother was of English descent. He published his first novel, Masters of the Board, in 1985 at the age of 16. It was a political thriller, the plot of which was an allegory based on a coup that was carried out in Nigeria just before it was written. He was imprisoned for six months on suspicion of an attempt to overthrow the government. He continued to write after his release from jail, but was imprisoned for one year after the publication of his 1987 novel Sirocco. After he was released from jail this time, he composed several anti-government plays that were performed on the street near government offices for two years. He was imprisoned a third time and was placed on death row. Luckily, his friends had bribed government officials for his release in 1991, and immediately Abani moved to the United Kingdom, living there until 1999. He then moved to the United States, where he now lives.

Abani has been awarded a PEN/Barbara Goldsmith Freedom to Write Award, the 2001 Prince Claus Awards, a Lannan Literary Fellowship, a California Book Award, a Hurston-Wright Legacy Award and the Hemingway Foundation/PEN Award. Selections of his poetry appear in the online journal Blackbird. From 2007–2012, he was Professor of Creative Writing at the University of California, Riverside. He is currently a Board of Trustees Professor of English at Northwestern University.

His book of poetry, Sanctificum (Copper Canyon Press, 2010), is a sequence of linked poems, bringing together religious ritual, the Igbo language of his Nigerian homeland, and reggae rhythms in a postracial, liturgical love song.

Abani's foray into publishing has led to the formation of the Black Goat poetry series, which is an imprint of New York-based Akashic Books. Poets Kwame Dawes, Christina Garcia, Kate Durbin, Karen Harryman, Uche Nduka, Percival Everett, Khadijah Queen and Gabriela Jauregui have all been published by Black Goat.

His crime novel The Secret History of Las Vegas won the Edgar Award as Best Paperback Original in 2015.

In summer 2016, a broad selection of his works was published in Israel by the small independent publishing house Ra'av under the title "Shi'ur Geografia" (Hebrew for: Geography Lesson) edited by Noga Shevach and the poet Eran Tzelgov. The collection received great reviews and offered Hebrew readers a first encounter with the poetry of Abani.

All content from Kiddle encyclopedia articles (including the article images and facts) can be freely used under Attribution-ShareAlike license, unless stated otherwise. Cite this article:
Chris Abani Facts for Kids. Kiddle Encyclopedia.