The church is a fine example of the decorated gothic revival style seen in ecclesiastical architecture during the 19th century. The church is a Grade II* listed building and the Hinckley family tombs at the rear of the church are Grade II listed monuments. On the ceiling of the chancel are some unique pre-raphaelite canvas panels painted by John D. Batten.

The church as built by Johnson

Building work on Christ Church began in 1844 and was completed in 1847 when the church was consecrated. The church would be the first new parish church in Lichfield since medieval times. The growing population in the west of the city brought the need to build a new church to serve the community in that area.

The 3⁄4-acre site was given in 1844 by Richard Hinckley the owner of Beacon House and its surrounding estate grounds. The site of the church would be approximately 500m south of Beacon House at the edge of the estate grounds and visible to the Hinckley's from their home. The cost of building the church was provided by Ellen Jane Hinckley, the wife of Richard Hinckley. The church was built with local red sandstone in a decorated gothic revival style under the design of Thomas Johnson of Lichfield. When the church was completed in 1847 in consisted of a chancel, nave and west tower containing a bell cast in 1845 by C. G. Mears of London.

In 1887 the church was enlarged to the designs of Matthew Holding of Northampton. North and south transepts and bays were added. The north extension consisted of a Lady Chapel and the south extension provided the church with an organ chamber and choir vestry. These extensions were partly funded by S.L. Seckham (the new owner of Beacon House) and partly by public subscription. The churchyard was enlarged in 1895 and 1929. 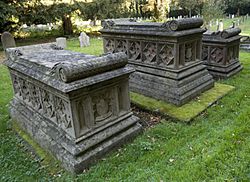 The church is still an active parish church within the community and holds regular Sunday services at 8am, 9:30am and 6pm. The church holds a Sunday school and is available for weddings, baptisms and funerals.

Christ Church CE (C) Primary School is located adjacent to the church. The school was founded in 1847 and provides education for children aged 4–11.

All content from Kiddle encyclopedia articles (including the article images and facts) can be freely used under Attribution-ShareAlike license, unless stated otherwise. Cite this article:
Christ Church, Lichfield Facts for Kids. Kiddle Encyclopedia.