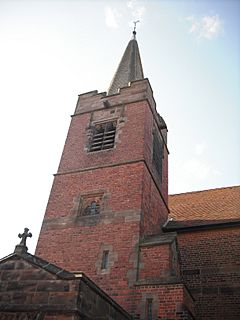 Tower from the south 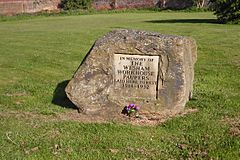 Christ Church is an Anglican church in Wesham, a small town in the English county of Lancashire. It is an active parish church in the Diocese of Blackburn and the archdeaconry of Lancaster. It was built 1893–94 by Paley, Austin and Paley, and is recorded in the National Heritage List for England as a designated Grade II listed building.

The church was used as a chapel-of-ease to Kirkham until 1913, when it was made a separate parish. The foundation stone was laid on 30 June 1892, by the Lady E. C. Clifton, and the church was consecrated by Bishop Moorhouse on 27 September 1894.

On 11 June 1986, Christ Church was designated a Grade II listed building by English Heritage. The Grade II designation—the third highest of the three grades—is for buildings that are "nationally important and of special interest". An active church in the Church of England, Christ Church is part of the diocese of Blackburn, which is in the Province of York. It is in the archdeaconry of Lancaster and the Deanery of Kirkham. It forms a benefice with Christ Church, Treales.

Christ Church is in the Decorated Perpendicular style and is constructed of red brick with dressings in red terracotta. The roof is red tile. The church plan consists of a nave and chancel under one roof, with a steeple to the south-west. The tower is of three stages and has a stepped sandstone parapet; the steeple is clad in green slate.

The nave has six bays and internally there are stone piers. The chancel has a large east window with mouchette tracery.

The churchyard contains the war graves of two soldiers of World War I, and four soldiers and a Royal Navy chaplain of World War II. There is also a memorial to the paupers of the Wesham Workhouse.

All content from Kiddle encyclopedia articles (including the article images and facts) can be freely used under Attribution-ShareAlike license, unless stated otherwise. Cite this article:
Christ Church, Wesham Facts for Kids. Kiddle Encyclopedia.