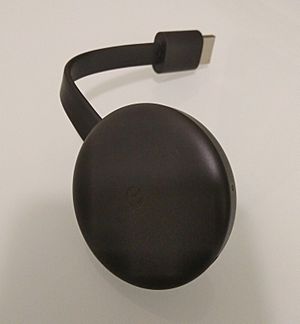 Chromecast is a digital media player from Google. It plugs into the HDMI port on a TV. The Chromecast shows content from a smart phone, tablet or PC on the tv.

The Chromecast has an HDMI plug, and a micro-USB port. Power comes from a USB port on a TV or from the included power adapter.

There is also a newer Chromecast with Google TV a USB-C port instead of micro-USB. It has up to 4K resolution.

All content from Kiddle encyclopedia articles (including the article images and facts) can be freely used under Attribution-ShareAlike license, unless stated otherwise. Cite this article:
Chromecast Facts for Kids. Kiddle Encyclopedia.