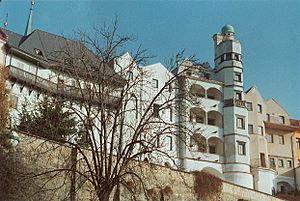 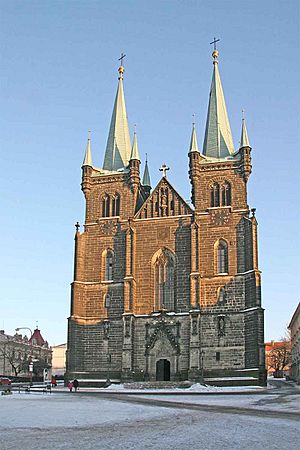 Church of The Assumption of The Virgin Mary

Chrudim is a district town in the Pardubice region of the Czech Republic.

Chrudim lies in the center of Eastern Bohemia is located 11 km south from Pardubice and 110 km east from Prague. Nearby, 3 km distant, is Slatiňany known for its horse breeding.

Archeological research shows the first people lived in the area in the later stone age (500-3500 BC). Slavs came in the 7th century AD. The first written record about Chrudim comes from 1055 AD and makes it officially one of the oldest settlements in eastern Bohemia. In the 13th century Chrudim was established and fortified as a town by the king Přemysl Otakar II.

Chrudim has one of the biggest urban conservation areas, over 52 hectares. It contains the historical center of the city. Chrudim is known for its culture, with many famous actors, musicians and other people. You can find several important museums there. Museum of Puppets in the Mydlář House has one of the biggest collections of puppets in the world. In Chrudim Regional Museum is Kabinet ex libris, where you can admire a huge collection of books. The recently rebuilt museum of baroque statues has nearby gardens. Main organized actions:

All content from Kiddle encyclopedia articles (including the article images and facts) can be freely used under Attribution-ShareAlike license, unless stated otherwise. Cite this article:
Chrudim Facts for Kids. Kiddle Encyclopedia.