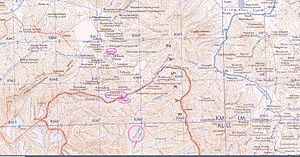 Chumar is a place in the provences of Jammu and Kashmir, India. The area is claimed by both China and India. According to China's Ministry of Defence "the two countries’ border, to this day, has not been designated". The problem is that for centuries, the sparsely inhabited mountainous region existed as a buffer zone between empires. A border war broke out in 1962 that has to date killed thousands of soldiers. The tension between the two countries has come and gone but is now raised again.

All content from Kiddle encyclopedia articles (including the article images and facts) can be freely used under Attribution-ShareAlike license, unless stated otherwise. Cite this article:
Chumar Facts for Kids. Kiddle Encyclopedia.