Church of All Saints, Campton facts for kids

The Church of All Saints is the Anglican parish church in the village of Campton, Shefford, Bedfordshire, England. Its official title is Campton and Chicksands Parish and encompasses the villages of Campton and Chicksands and the nearby military base, despite the base having its own church dedicated to Saint Gilbert of Sempringham. The military church is a non-denominational church, so it is not a part of the Anglican parish.

The building has been Grade II* listed since 1966. 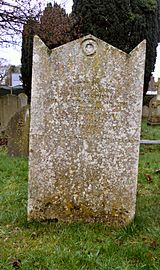 The grave of poet Robert Bloomfield in the churchyard

The church dates back to the 13th Century and was originally constructed from red sandstone hewn blocks. It has been added to and rebuilt many times over the last eight centuries, including the addition of the Osborn Mausoleum in 1649 and the Osborn Chapel in the same year (which forms the northern part of the church). Several of the Osborn crests and mottoes adorn the church which in Latin is 'Quantum in Rebus Inane,' and translates as 'What vanity in human affairs.'

The tower is 43 feet (13 m) high and 10 feet (3.0 m) wide and was added in the 15th century replacing part of the south aisle. The church was renovated in the late 19th century with the tower being rebuilt from well cut sandstone blocks. At this time the organ was installed and was believed to have been from Chicksands Priory.

Robert Bloomfield (1766 - 1823), the pastoral poet, is buried in the churchyard. Although he lived and died in Shefford, he is interred in Campton as the church in Shefford, was a Chapel of Ease (essentially a sub-church of All Saints as Parish church) and as such had no burial ground. The church at Shefford remained in the Campton parish up until 1903, when it gained a separate parish for itself. The first register for the church was started in 1568 and includes records for Campton-Cum-Shefford (as the Parish was known) up until 1812 when Shefford's own register was started.

The graveyard also contains one Commonwealth War Grave from the First World War.

Rectors and vicars of the parish 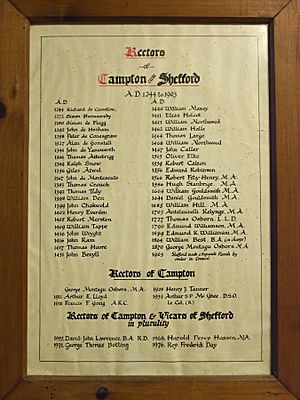 The names given below are from the List of Campton Rectors held by Central Bedfordshire Council. There is a parchment sheet with a list of rectors displayed inside the church (see image). This list differs with spellings and dates and where anomalies exist, they are annotated. The current incumbent is the Reverend Dean Henley who acceded in 2006.

The bells and the bell-ringers 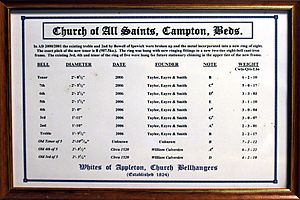 List detailing the bells of All Saints Church Campton

The notice in the church (see image) lists 11 bells in the tower, two of which were cast in 1520 by William Culverden. Eight new bells were cast for the tower in 2006 by John Taylor & Co of Loughborough. The bells were hung alongside the existing three bells and dedicated on the 1 July 2007 being blessed in a special ceremony by the Bishop of Bedford.

The Campton Bell-Ringers peal out the bells for Sunday morning services and the bells are used in bell ringing competitions.

The church has many notable features; two piscinas (one by the altar and one in the south chapel), alcoves for effigy display and plaques and markers detailing remembrances for the dead. There are seven plaques and windows dedicated to members of the Osborn family of Chicksands Priory commemorating their dead, but the oldest plaque dates back to 1489 and remembers Richard Carlyll and his wife Joan, both of whom died on 14 February 1489. No explanation is given for why they both died on the same day. 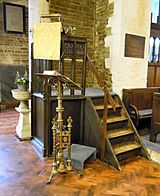 The lectern and pulpit 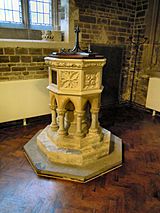 Some of the stained glass windows are dedicated to the dead and others (such as the east window) depict 16 saints and the Lamb of God with a Banner of Victory at the top. The window at the south wall of the chancel depicts the Christian virtues Faith, Hope and Charity. The glass lights, designed by Heaton, Butler and Bayne were made by the Chance Brothers of Oldbury and were dedicated in 1912. The windows in the south wall, like the east windows, are by Heaton, Butler and Bayne. The west end of the church is dominated by the gallery, which was designed and constructed by Peter Farmer in 2002. Beneath this is the Fred Oakley Room, a Campton resident and benefactor of the church who died in 2000. The two war memorials on either side of the entrance to the Oakley Room commemorate the men of Campton who gave their lives in World War I and World War II. These memorials were originally sited at each side of the North door. The oak screens that form the east and north sides of the ringing chamber are 15th century and were formerly part of the chancel screen.

The north wall dates from 1649 and a number of architectural fragments, believed to be from Chicksands Priory, have been incorporated in this and other walls in the church. The monuments set in the wall are dedicated to Sir Danvers Osborn and the Rev. Arthur McGee, the last Rector resident in the village. The ornate baptismal font was installed c1893 and commemorates the Hon. Charlotte Osborn. The Gothic-style lectern is late 19th century while the pulpit is constructed from parts of a 14th-century screen which includes a traceried panel.

The two-tiered glazed screen that separates the chancel from the Osborn Chapel is dated 1649. The communion rail is 18th century. The church used to have a Jacobean screen across the front of the Chancel. The screen dated back to 1670, but was destroyed in a fire in May 1960 when a sulphur candle used to remove bees in the church had been left unattended. The altar is framed by a two-centred chancel arch with male head-stops; the head-stops on the north (left) niche wear a style of soft cap that was popular in about 1500, while those on the south (right) are bareheaded. The organ possibly originated in Chicksands Priory and was installed in its purpose-built chamber in 1894.

The Osborn Chapel contains monuments to members of the Osborn Family including two large white marble altars on the north side with carved oval armorial cartouches with hanging fabric and garlands between. These memorials by John Stone (1620-1667), the son of Robert Stone, are superb examples of 17th century church monumental sculptures. Amongst those commemorated are Sir Peter Osborn (died 1653), who was Governor of Guernsey when its castle was besieged by the Puritan navy; and John Osborn who, after a distinguished diplomatic career died at Rudolfstadt in Saxony in 1814 on the eve of his return to England after 8 years as a captive under Napoleon Bonaparte.

The church has numerous examples of early graffiti. The restoration of the church in 1895 sympathetically used as much stone as possible from the original building, although it was not always possible for it to be repositioned in the right place. As a result, graffiti appears in wall spaces where they would not normally be expected. There are good examples in the ringing chamber, the Oakley Room and in the gallery.

The Welsh stone memorial to the pastoral poet Robert Bloomfield was installed in 2003; he is buried in the churchyard.

All content from Kiddle encyclopedia articles (including the article images and facts) can be freely used under Attribution-ShareAlike license, unless stated otherwise. Cite this article:
Church of All Saints, Campton Facts for Kids. Kiddle Encyclopedia.