Church of All Saints, Houghton Conquest facts for kids 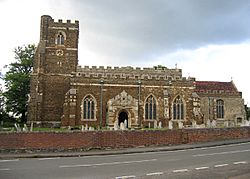 Church of All Saints is a Grade I listed church in Houghton Conquest, Bedfordshire, England. It became a listed building on 23 January 1961. The parish church, dedicated to All Saints, was built during the 14th century. There are also several monuments. Houghton Conquest's rectory was united with that of Houghton-Gildable in 1637, in the archdeaconry of Bedford, and diocese of Lincoln. It was under the patronage of the Master and Fellows of St John's College, Cambridge.

On 4 October 2018 it was reported that the entire lead roof had been stolen.

The church is spacious, built in the Early English Period and Decorated styles. It consists of chancel, nave, aisles, south porch, and an embattled tower containing six bells. It was repaired in 1845. The stained glass east window, erected in 1880 by John William Burgon, Dean of Chichester, is a memorial to three benefactors. Built in 1830, some of the walls bear traces of frescoes, the designs of which are in some parts sufficiently distinct to be distinguished. Over the north doorway is a huge painting of St Christopher, of the 15th century. On the north walls of the chancel, there is a monument of carved alabaster. There is also an altar slab from 1644, as well as a few mutilated brasses. The register dates from the year 1595.

The following rectors are named in The History of All Saints Church Houghton Conquest, by G. P. K. Winlaw, and other sources as cited:

In addition, two other people have been named as rector:

All content from Kiddle encyclopedia articles (including the article images and facts) can be freely used under Attribution-ShareAlike license, unless stated otherwise. Cite this article:
Church of All Saints, Houghton Conquest Facts for Kids. Kiddle Encyclopedia.