The Church of St Etheldreda, also known as the Church of St Audries, is a Church of England parish church in West Quantoxhead, Somerset, England. Designed by John Norton, it was built in 1854-56 and is a Grade II* listed building.

The Church of St Etheldreda was built on the site of an earlier church, which had a chancel dating to the 13th and 14th-centuries, and a nave and tower of the 15th-century. By the middle of the 19th-century, the church had become dilapidated and was considered too small to adequately serve the local congregation. After a period of deliberation, Sir Alexander Fuller-Acland-Hood favoured building a new church rather than restoring the existing one, and plans were drawn up by John Norton of London. The cost of the church was covered by Sir Fuller-Acland-Hood and his father-in-law Sir Peregrine Acland, along with a £300 contribution from Mr. St. Aubyn.

The old church was demolished in 1853 and construction of the new church began in 1854. It was carried out by workmen employed on the estate, under the supervision of Sir Acland. The work using Doulting stone was carried out by Messrs Wall and Hook of Stroud. The church was consecrated by the Bishop of Bath and Wells, the Right Rev. Robert Eden, on 17 October 1856. It cost over £16,000 to complete.

The Preb John Richard Vernon was rector from 1874 until his death in 1902. He wrote several hymns and a number of popular religious works including The Harvest of a Quiet Eye: leisure thoughts for busy lives (1867). 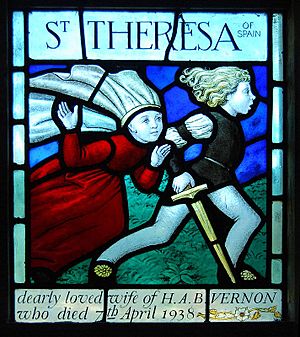 The church is built of local sandstone from Sampford Brett, with the windows and dressings in Doulting stone, piers of Babbacombe marble and slabs of Bath stone covering the roof. Designed in the Early Decorated style and able to accommodate 250 persons, the church is made up of a four-bay nave, north and south aisles, chancel, north chapel (used as an organ chamber and vestry), north-west tower (with baptistry underneath) and south porch. Approximately 1,000 tons of stone was used for the church's foundations and vaults, which were formed for the Acland, Hood and St. Aubyn families, with additional space for the family of the rector. The tower has a peal of five bells and a clock made by Dent of London. It is capped with a small spirette and surmounted by a gilded cross and vane. The parapets of the tower contain shields with emblems of St Etheldreda, and monograms of the Acland and Hood families.

The church's wooden fittings were carved from oak sourced from Fairfield, the estate of Sir Acland. Many of them, including the pews, pulpit, reading desk, reredos and stalls in the chancel, were carved by Mr. Davis of Taunton. The octagonal font belonged to the previous church and dates to the 12th-century. It is of polished marble, supported on eight columns of polished Cornish serpentine, with a base of black Plymouth marble. The carving of the stone corbels was carried out by Farmer of London. The passages of the nave was laid with Minton's tiles and the chancel laid with Minton's encaustic tiles. The stained glass windows in the chancel and north chapel were by O'Connor of London, and the small stained glass window in the baptistry by Messrs Hardman of Birmingham. The organ was supplied by Walker of London.

All content from Kiddle encyclopedia articles (including the article images and facts) can be freely used under Attribution-ShareAlike license, unless stated otherwise. Cite this article:
Church of St Etheldreda, West Quantoxhead Facts for Kids. Kiddle Encyclopedia.