St Nicholas Church in Thames Ditton, Surrey, England, is a Grade I listed Anglican parish church that has parts that date back to the 12th century.

The Norman manorial owner after the Conquest gave the churchlands and tithes payable across the privately held land (the bulk, which did not form wooded or meadowland common or unproductive waste) to the monks of the parish to Merton Priory: during the reign of Henry I (1100–1135), Gilbert the Norman, High Sheriff of Surrey, gave the advowson of Kingston - the right to appoint the incumbent priest of a church - together with four young chapelries to Merton Priory. Whether these were fully built of stone at the point is uncertain.

Gilbert died in 1125, which demonstrates a functional chapelry, whether or not of stone, at Thames Ditton around 1120, with higher levels of ecclesiastical control by Kingston Church and Merton Priory. In any event the earliest stonework of the church appears to English Heritage to date to the 12th century. A certain 'William' was Vicar at Thames Ditton from 1179.

After the Dissolution of the Monasteries, the advowson and rectory of St Nicholas passed into private hands as from 1538. For previous centuries, the great tithes rested with Kingston rectory, whereas the owners of Imber Court replaced it from the 16th century until the 19th century as partial tithe beneficiaries and patrons, paying for the curate himself. By 1848, the rectory had been replaced by a perpetual curacy belonging to King's College, Cambridge.

The building is mostly flint stones with stone dressings, its tower brick and stonework dressings with tile patchings, a weatherboard is above. A notable exception is an aisle wall which is brick. The roof is of plain tiles except the porch which is of slate. As reflected by these materials and the degree of dressing, the building has undergone a great many changes, and very little of the original structure is visible. The oldest elements are likely to be the north wall of the chancel and the walls of the broad and low tower. It was originally a long narrow Norman building from the bell tower to the chancel. The tower walls and the north wall of the chancel are part of the original Norman structure and contain lancet windows. Additions came with a 14th-century chapel on the north and a 15th-century north aisle. The vestry was originally a burial vault built in 1676. The north aisle was enlarged in 1836 and a south aisle added in 1864. 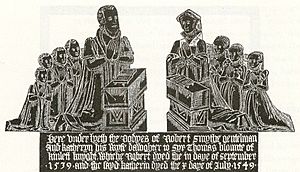 All content from Kiddle encyclopedia articles (including the article images and facts) can be freely used under Attribution-ShareAlike license, unless stated otherwise. Cite this article:
Church of St Nicholas, Thames Ditton Facts for Kids. Kiddle Encyclopedia.