The Church of the Annunciation of Our Lady of the Newarke in Leicester, was a collegiate church founded by Henry of Grosmont, 1st Duke of Lancaster, in 1353. The name "Newarke" is a translation of the Latin "novum opus" i.e. "new work" and was used to distinguish the church from the older collegiate church of Leicester Castle, the Church of St Mary de Castro. Duke Henry enlarged his father's hospital foundation in the southern extension to the castle bailey and built the new church to house a holy relic, part of the Crown of Thorns given him by John II of France. The church became a place of pilgrimage. Leland visited it around 1540, shortly before its destruction during the Suppression of the Chantries. He described the church as "not very great...but exceeding fair."

Use as a burial place

The church became an important burial place of notable members of the Lancastrian dynasty. Those buried here included:

Early sources (the Frowyk Chronicle and the Ballad of Bosworth Field) strongly suggest that the church was where the naked corpse of Richard III of England was displayed after his death at Bosworth Field and prior to his burial in the Greyfriars priory. 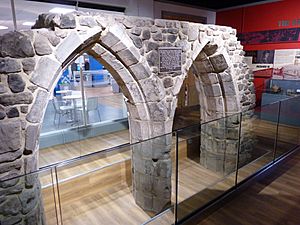 Only two arches survive from the original building, preserved in situ under what is now the Hawthorn Building of De Montfort University, where the public can see them in what is now the university's heritage centre.

All content from Kiddle encyclopedia articles (including the article images and facts) can be freely used under Attribution-ShareAlike license, unless stated otherwise. Cite this article:
Church of the Annunciation of Our Lady of the Newarke Facts for Kids. Kiddle Encyclopedia.