Church of the Incarnation, Episcopal (Manhattan) facts for kids

Kids Encyclopedia Facts
Not to be confused with Church of the Incarnation, Roman Catholic (Manhattan) on St. Nicolas Avenue and 175th Street.

The Church of the Incarnation is a historic Episcopal church at 205-209 Madison Avenue at the northeast corner of 35th Street in the Murray Hill neighborhood of Manhattan, New York City. The church was founded in 1850 as a chapel of Grace Church located at 28th Street and Madison. In 1852, it became an independent parish, and in 1864-85 the parish built its own sanctuary at its current location.

Notable among the parishioners of the church were Admiral David Farragut and Eleanor Roosevelt, who was confirmed in the church. The funeral for Sara Roosevelt, the mother of Franklin Delano Roosevelt, was held at the church, and a ramp was built so that FDR could attend. Several prominent families had pews and have memorials in the church, including the Delanos, Langdons, Sedgwicks, Seaburys, Brooks, and Rikers families. 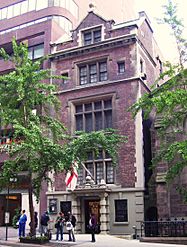 The sanctuary was built in 1864-1865, and was designed by Emlen T. Littel. It was "distinguished for both its architecture and refined interior decoration and artwork." The cornerstone was laid on March 8, 1864 by Bishop Horatio Potter of the New York Diocese, the first services were held on December 11, and the church was consecrated on April 20, 1865. The church rectory was constructed in 1868-69, designed by Robert Mook.

Except for its tower and walls, the building was destroyed by a fire which began on March 24, 1882. It was rebuilt and enlarged by David Jardine, with a spire added in 1896 by Heins and LaFarge following Jardine's designs. In 1905-06 the church rectory was rebuilt and received a new facade in neo-Jacobean style designed by Edward P. Casey. It is now the H. Percy Silver Parish House.

The building was designated a New York City landmark in 1979, and was added to the National Register of Historic Places in 1982. In 1991, a renovation of the building was supervised by Jan Hird Pokorny.

A list of stained glass windows by various artists of the Victorian Era.

All content from Kiddle encyclopedia articles (including the article images and facts) can be freely used under Attribution-ShareAlike license, unless stated otherwise. Cite this article:
Church of the Incarnation, Episcopal (Manhattan) Facts for Kids. Kiddle Encyclopedia.