Church of the Transfiguration, Roman Catholic (Manhattan) facts for kids

Kids Encyclopedia Facts
For the "Little Church Around the Corner" in Midtown, see Church of the Transfiguration, Episcopal (Manhattan).

The Church of the Transfiguration is a Roman Catholic parish located at 25 Mott Street on the northwest corner of Mosco Street (formerly Park Street) in the Chinatown neighborhood of Manhattan, New York City. The parish is under the authority of the Archdiocese of New York and is staffed by the Maryknoll order.

The church was built in 1801 in the Georgian style of architecture for the Zion English Lutheran Church., a Lutheran congregation that subsequently converted en masse to the Protestant Episcopal Church. The church then became known as Zion Protestant Episcopal Church. It was rebuilt after a major fire in 1815 which gutted the church and 35 dwellings in the surrounding Five Points neighborhood. The church was rebuilt thanks to the effort of congregation member Peter Lorillard.

The Episcopal congregation sold the building in 1853 to the Roman Catholic Church of the Immigrants parish, which had been founded in 1827 by the Rev. Felix Varela y Morales to minister to the poor Irish in the Five Points who were predominantly Roman Catholic. The parish later changed its name to the Church of the Transfiguration. 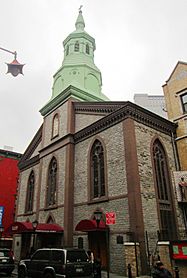 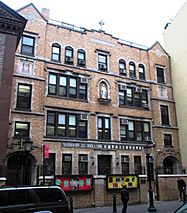 The church is one of four on the Lower East Side built from Manhattan schist. The AIA Guide to New York City describes it as "[A] Georgian church with Gothic (small-paned double-hung) windows ... with Gothic tracery ... Dressed Manhattan schist makes neat building blocks, with brownstone detail." A copper-covered octagonal tower designed by Henry Engelbert was added to the church building in 1868, when the Gothic windows are assumed to have been added as well.

The church was designated a New York City landmark in 1966, and was added to the National Register of Historic Places in 1980.

By the 1840s, many new European immigrants had arrived in the area served by the church, which became known as the "Five Points". Many of the earlier Protestant residents moved to northern parts of the city, which prompted the church being sold to the Roman Catholic Diocese of New York. Over the years it has continued to serve the Irish, Italian and more recently Chinese immigrant communities.

Today, this parish serves an almost entirely Chinese congregation. It offers Sunday masses in English, Cantonese and Mandarin, and has a Catholic School open to all religions. The Maryknoll Fathers and Brothers who staff the parish belong to an order that has historical roots in overseas missions to China in particular and the entire world in general. Because the Maryknoll Order is dedicated to overseas mission, this Chinese Roman Catholic Parish has the unique designation as the only parish that is entirely staffed by Maryknollers. Among is pastors was Bishop John W. Comber, M.M. (1967-1969), a Maryknoll Missionary who had served in Fushun.

Transfiguration School is the Catholic parochial school linked to the Church of the Transfiguration. It was founded in 1832 by Varela and became open to children of all faiths in 1969.

All content from Kiddle encyclopedia articles (including the article images and facts) can be freely used under Attribution-ShareAlike license, unless stated otherwise. Cite this article:
Church of the Transfiguration, Roman Catholic (Manhattan) Facts for Kids. Kiddle Encyclopedia.