Churubusco; often shortened to Busco), is a town located near the headwaters of the Eel River in the extreme northeast corner of Whitley County, Indiana, United States, in Smith Township, about 16 miles (26 km) northwest of Fort Wayne. The population was 1,796 at the 2010 census.

There were 706 households of which 37.8% had children under the age of 18 living with them, 49.4% were married couples living together, 14.4% had a female householder with no husband present, 4.5% had a male householder with no wife present, and 31.6% were non-families. 26.5% of all households were made up of individuals and 10.5% had someone living alone who was 65 years of age or older. The average household size was 2.54 and the average family size was 3.06.

There were 650 households out of which 36.0% had children under the age of 18 living with them, 50.9% were married couples living together, 13.1% had a female householder with no husband present, and 32.5% were non-families. 28.6% of all households were made up of individuals and 13.8% had someone living alone who was 65 years of age or older. The average household size was 2.54 and the average family size was 3.15. 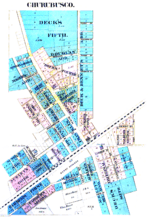 An 1889 plat map of Churubsuco showing the first two towns, "Union" and "Franklin."

Originally, the area of Churubusco was made up of two towns founded in the 19th century by European Americans: Union (in honor of the union victory of the Civil War) and Franklin (in honor of the founding father, Benjamin Franklin) that bordered each other across a railroad track. In the 1840s, the populations of both Franklin and Union grew large enough to qualify each for a post office. Before that time, residents of both towns had to trek 11 miles by foot or horse and buggy to nearby Columbia City to get their mail. Since the towns were in the same location, the Postmaster General ordered the towns to apply for a joint post office. The Postmaster General denied the use of either "Union" and "Franklin" as the new post office name, since both were already used by other Indiana towns.

After a community meeting, the residents selected Churubusco for the new post office, named after the site of the 1847 Battle of Churubusco, in Mexico during the Mexican-American War. At the time, after the suggestion of local school teacher Eliza Rich, the townsfolk thought it was as patriotic a name as Union and Franklin, since the United States won a large victory there. More importantly, they were certain no other Indiana town would already have chosen such a unique name. The Churubusco post office has been in operation since 1848.

The name Churubusco is a Spanish corruption of an indigenous Nahuatl toponym (place name) referring to a temple area celebrating the Aztec god Huitzilopochtli. It is bordered by the Rio Churubusco in Mexico City. The Spanish-Nahuatl word literally translates as "place of the hummingbirds. 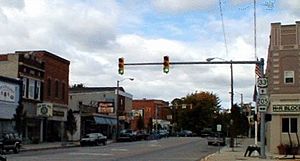 Churubusco is home to the oldest continually held festival in Indiana. Turtle Days is rooted in the lore of Oscar the Turtle or the Beast of Busco, a giant snapping turtle that reportedly haunted nearby Fulk's Lake in Allen County. Many have tried to catch the monster turtle but no successful attempt has ever been recorded. He has been thought to be the size of a small car. The lake he is rumored to hide in has been drained, but no evidence was found. A popular theory as to why this turtle is so elusive is because the lakes and ponds around Churubusco are connected through an extensive series of channels and streams; some of which are underground tunnels. Many locals have claimed to see the beast but until evidence can be found, Oscar will still be a mystery of Churubusco, Indiana.

Churubusco recently completed phase one of the Downtown Revitalization Project, funded in part with a Main Street Revitalization Grant. The completed phase reconstructed sidewalks, added decorative lighting and landscaping features, and new benches and trash receptacles along the 100 block of North Main Street (US 33), enhancing the beauty of the downtown area. Churubusco's downtown is home to many locally owned shops including two antique stores, a hardware store, a secondhand clothing store, and restaurants. One famous restaurant, Magic Wand, is located on South Main Street. It is a family friendly diner that also has an outside ice-cream shop. This Indiana landmark is famous for its unusual decor, with the inside of the restaurant decorated with hundreds of clowns.

Churubusco Chamber of Commerce and the Town of Churubusco have been instrumental in creating events that have assisted in the improvement of the quality of life for town residents. Every August, Churubusco hosts the 'Busco Block Party. This free event features local merchants, live music, and other events. The Chamber and the Town have also partnered to organize Halloweenfest. Held the Saturday before Halloween, the event features a merchant trick-or-treat, costume contest, hayrides, and more. Hundreds of children attend the event and it continues to grow every year.

All content from Kiddle encyclopedia articles (including the article images and facts) can be freely used under Attribution-ShareAlike license, unless stated otherwise. Cite this article:
Churubusco, Indiana Facts for Kids. Kiddle Encyclopedia.