Cienfuegos is the smallest province in Cuba. Growing and processing sugar is very important to its economy. There are many sugar mills and sugarcane plantations across the province.

Scuba diving is a popular activity in Cienfuegos. There are many underwater caves and over 50 places for diving. There are also waterfalls in the mountains of the province. 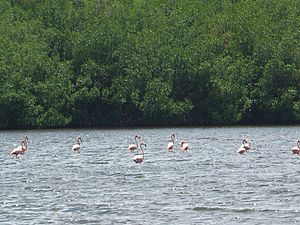 Flamingos in the Guanaroca lagoon

All content from Kiddle encyclopedia articles (including the article images and facts) can be freely used under Attribution-ShareAlike license, unless stated otherwise. Cite this article:
Cienfuegos Province Facts for Kids. Kiddle Encyclopedia.