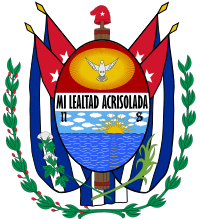 Sancti Spíritus is one of the provinces of Cuba. Its capital is the identically named Sancti Spíritus. Another major city is Trinidad.

The southern coast of the province is flat, but the western portion of Sancti Spíritus province is mountainous. The southeast has numerous mangroves and swamps.

The largest man made reservoir in Cuba, the Embalse Zaza, is in Sancti Spíritus province.

Tourism is a big earner for the province, with most of the tourism revolving around the old city of Trinidad, a World Heritage listed city which has dozens of colonial buildings (and almost no 20th century architecture) dating back to the Spanish conquest in the 1500s, and, as with most of Cuba, sugarcane and cattle are important commodities. Some tobacco and rice is also grown.

During the 1600s, both Dutch and British pirates attempted to take control of what is today Sancti Spíritus province, but with little success, as the Spanish garrison held them off. From 1660 to 1680, Trinidad was plagued by pirates from Jamaica and Tortuga, and on two occasions, pirates razed the city.

The provinces of Cienfuegos, Sancti Spíritus, and Villa Clara were once all part of the now defunct province of Santa Clara.

All content from Kiddle encyclopedia articles (including the article images and facts) can be freely used under Attribution-ShareAlike license, unless stated otherwise. Cite this article:
Sancti Spíritus Province Facts for Kids. Kiddle Encyclopedia.