In February 1963, Cinerama Inc. unveiled a radically new design for theaters which would show its movies. They would be based on the geodesic dome developed by R. Buckminster Fuller, would cost half as much as conventional theaters of comparable size, and could be built in half the time. Cinerama's goal was to see at least 600 built worldwide within two years. The following April, Pacific Theatres Inc. announced plans to build the first theater based upon the design, and had begun razing existing buildings at the construction site. Located on Sunset near Vine Street, it would be the first new major motion picture theater in Hollywood in 33 years, and would be completed in time for the scheduled November 2 press premiere of It's a Mad, Mad, Mad, Mad World. The design was proposed by French architect Pierre Cabrol, lead designer in the noted architectural firm of Welton Becket and Associates. Pierre Cabrol worked with R. Buckminster Fuller during his studies at the M.I.T..

Pacific Theatres founder, William R. Forman, announced the construction of the Cinerama Dome in July 1963 at a star studded ground breaking ceremony where Spencer Tracy, Buddy Hackett, Mickey Rooney, Dick Shawn, Edie Adams, and Dorothy Provine donned hard hats, and with picks and shovels, began construction. Forman had committed to United Artists that the theatre would be ready for the November 7, 1963 world premiere of the first movie filmed in the new 70mm, single strip Cinerama process, Stanley Kramer’s It’s a Mad, Mad, Mad, Mad, World. Working around the clock, the entire construction spanned only 16 weeks. The Cinerama Dome is the only concrete geodesic dome in the world. The theatre is made up of 316 individual hexagonal and pentagonal shapes in 16 different sizes. Each of these pieces is approximately 12 feet (3.7 m) across and weigh around 7,500 pounds (3,400 kg). The theatre also has design elements such as a loge section with stadium seating, architecturally significant floating stairways, and at the time of its opening, the largest contoured motion picture screen in the world, measuring 32 feet (9.8 m) high and 86 feet (26 m) wide.

With its 86 feet (26 m) wide screen, advanced acoustics and 70mm film capability, the Cinerama Dome remained a favorite for film premieres and "event" showings. But by the late 1990s the motion picture exhibition business began to favor multiplex cinemas, and Pacific Theatres proposed a plan to remodel the Dome as a part of a shopping mall/cinema complex. Historical preservationists were outraged, not wishing to see another great theater turned into a multiplex or destroyed. At the same time, a small contingent of Cinerama enthusiasts had begun resurrecting the three-projector process. They and the preservationists prevailed on Pacific to rethink its plans for the property.

The preservation of the Cinerama Dome came at a time when most other surviving Cinerama theaters were being demolished. An example of this was the case of the Indian Hills Theater in Omaha, Nebraska, a round Cinerama theater boasting a 110-foot screen which was razed in 2001 to make room for a parking lot.

The Cinerama Dome was declared a Los Angeles Historic-Cultural Monument in 1998.

The Cinerama Dome, decorated for Shrek 2 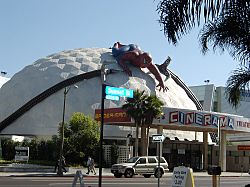 The ArcLight Cinerama Dome decorated for Spider-Man 2 in 2004

In 2002 after a two-year closure, the Cinerama Dome was reopened as a part of Pacific Theatres' ArcLight Hollywood complex. The dome remains essentially unchanged though there have been improvements, notably in the acoustics. But for the first time ever, the Cinerama Dome began showing movies in the three-projector format. It is one of only three such theaters in the world today.

The Cinerama Dome made its digital projection debut in May 2005 with Star Wars: Episode III – Revenge of the Sith. In 2009, James Cameron's Avatar was the first 3D film to be shown in the Cinerama Dome, using technology from XpanD 3D.

in December 2015, the Cinerama Dome upgraded to a laser projection system, using two Christie 6P projectors and Dolby 3D. The venue is still capable of both 35mm and 70mm film projection.

All content from Kiddle encyclopedia articles (including the article images and facts) can be freely used under Attribution-ShareAlike license, unless stated otherwise. Cite this article:
Cinerama Dome Facts for Kids. Kiddle Encyclopedia.