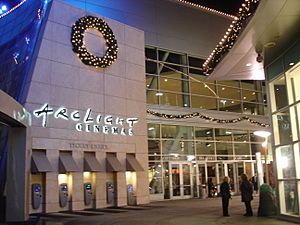 The courtyard entrance of the Arclight Hollywood complex.

The ArcLight Hollywood is a 15-screen multiplex located at 6360 Sunset Boulevard in Hollywood, California. All 15 screens feature stadium seating, and carry a THX certification for optimal sound and picture presentation. The building is located adjacent to the Cinerama Dome, which is now part of the ArcLight complex. The theater opened March 22, 2002 and is a subsidiary of The Decurion Corporation, which also owns Pacific Theatres.

The ArcLight Hollywood was the first theatre in the ArcLight chain to open, and is considered to be the company's flagship.

ArcLight Hollywood provides numerous amenities to its customers. Each theater has reserved seating. The only promotional material shown before showtimes are trailers. All of the ArcLight theaters sell alcohol at the concession stand.

At showtime, immediately before the trailers begin, an Usher Greeter introduces the film to the audience and states the ArcLight's policies regarding quality assurance, i.e. two ushers will remain in the theater until a few minutes after the film has begun, to ensure that the picture and sound quality are acceptable. They also inform the audience to turn their cellphones to the silent function, and to refrain from texting. Seating is prohibited after a film has begun, in correlation with Arclight's new slogan, “Your Movie Time Uninterrupted.”

As of September 2011, all ArcLight locations show digital presentations of their features. Each location has two houses with Kinoton 35mm projectors for archival and special presentations.

The ArcLight routinely features exhibits of local art or props and costumes from current films.

Tickets for all movie showings feature assigned seating. Upon purchasing a ticket, customers are allowed to select their preferred seat and see which seats have already been reserved. The only restriction is the inability to select a seat if it creates a single seat space between an already reserved seat. This is to prevent orphan empty seats which could only be filled by a single individual.

Parking is located off Ivar to the west and DeLongpre to the south and off Sunset, just east of the Cinerama Dome in an adjacent garage. The parking garage is not owned by ArcLight, and also serves several restaurants, stores, and a gym located in the ArcLight complex, as well as Amoeba Music, which has its own parking lot but offers validation at the Ivar structure as well.

On March 2, 2010, ArcLight announced the opening of a new location in Pasadena at Pacific Theaters at Paseo Colorado. The new location opened in the Summer of 2010.

In late 2010, ArcLight opened a new location in the South Bay Area of Los Angeles in the city of El Segundo. The new location is called "ArcLight Beach Cities".

In November 2012, ArcLight opened its first location outside of Los Angeles County. The "ArcLight La Jolla", located in San Diego, California at Westfield UTC, was part of the mall's $180 million renovation.

In October 2014, the first location outside California opened at Westfield Montgomery in Bethesda, Maryland.

In 2015, Arclight opened two locations in the Midwest, both in the state of Illinois. The first screen in Glenview, Illinois, opened in May 2015, followed by the second location in Chicago in November 2015. The Glenview location was previously occupied by Regal and extensively remodeled to the chain's standards, while the Chicago location was the chain's first theatre constructed in the Midwest.

In addition to the Arclight Chicago, the chain opened the first of two proposed locations in Santa Monica, California in November 2015 in the newly remodeled Santa Monica Place. In August 2017, the developer for the second ArcLight screen announced that they were abandoning the deal, citing doubts about its profitability due to being in close proximity to the Santa Monica Place Arclight screen. If completed, it would have featured the first ArcLight IMAX screen.

In January 2016, the first northeast location was announced for ArcLight Boston in Boston, Massachusetts.

All content from Kiddle encyclopedia articles (including the article images and facts) can be freely used under Attribution-ShareAlike license, unless stated otherwise. Cite this article:
ArcLight Hollywood Facts for Kids. Kiddle Encyclopedia.