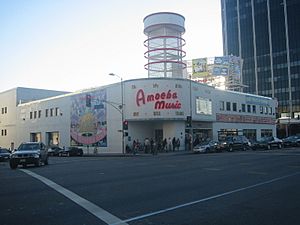 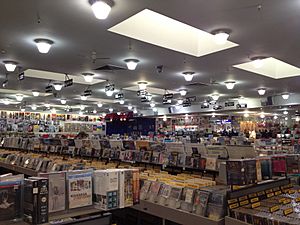 Inside of Amoeba Music in San Francisco in 2011

Amoeba Music is a US independent music chain with stores in Berkeley, San Francisco, and Hollywood, Los Angeles, California. It was founded in 1990 in Berkeley, California and remains in operation, having survived the decline of CD sales in the 2000s.

Founded by former employees of nearby Rasputin Records, Amoeba opened on Telegraph Avenue in Berkeley in 1990. Cofounders include but are not limited to Marc Weinstein, Dave Prinz, Yvonne Prinz, and Kent Randolph.

The San Francisco store opened on November 15, 1997 in the Haight-Ashbury district, near Golden Gate Park. It was located in the former 24,000-square-foot (2,200 m2) Park Bowl bowling alley. It regularly stocks upwards of 100,000 CDs, vinyl records, and audio cassettes, both new and used.

The Southern California location was added on November 17, 2001 when the store opened a new branch on Sunset Boulevard (at Cahuenga Boulevard) in Hollywood. At the time of its opening, the store planned to stock as many as 250,000 titles, which would have placed it among the largest independent music stores in the world. According to Los Angeles Times writer Michael Hiltzik, the location "instantly became a Hollywood landmark." Documents published by the Los Angeles Department of Planning in August 2017 indicate that the site will be demolished and replaced by a 28-story contemporary glass-and-steel tower with 232 residential units (including ten units for very low-income residents) and 7,000 square feet (650 m2) of ground-level commercial space. Should the City approve the project, it was expected that construction would begin in mid-2019, and be completed in 2021.

On April 27, 2020, Amoeba announced that due to the Coronavirus Pandemic, the Hollywood location on Sunset Boulevard would not be reopening as hoped (to allow for final farewell events), but Amoeba would be relocating to their new Hollywood Boulevard location once they are permitted to reopen.

Amoeba's world music department was headed by Robert Leaver, co-founder of the Round World Music record shop and label in San Francisco. He also worked as a buyer of international records for Amoeba's Berkeley location.

The stores also trade in movies, though secondarily to their music business. Each location has a smaller collection of movies on DVD, VHS, Laserdisc and Blu-ray Disc. In addition, each store maintains a selection of music-related posters and artwork for purchase, as well as Amoeba-branded merchandise. The Hollywood location has the entire 2nd floor dedicated to DVD and Blu-ray Disc. In addition, Amoeba Music frequently holds free shows during store hours with locally and nationally known artists from a wide variety of genres.

Primarily operating on re-selling used goods, Amoeba has survived the decline of CD sales since the early 2000s with its trade-in program and the advent of the vinyl revival. Along with the statewide stay-at-home order issued by California governor Gavin Newsom in the COVID-19 pandemic, many non-essential stores were told to close to prevent spread of COVID-19. Amoeba subsequently started a fundraising campaign on GoFundMe to pay the bills as most of their income is derived from in-store purchases.

Amoeba's YouTube channel was created on January 27, 2006 and is home to interviews, recordings of live performances at Amoeba locations, and the Webby Award-winning series “What’s In My Bag?” with various “featuring artists and tastemakers sharing what they found shopping at Amoeba.”

All content from Kiddle encyclopedia articles (including the article images and facts) can be freely used under Attribution-ShareAlike license, unless stated otherwise. Cite this article:
Amoeba Music Facts for Kids. Kiddle Encyclopedia.