Under the Swingle system, the desert lime was classified in the genus Eremocitrus, a close relative of the genus Citrus. More recent taxonomy considers all the Australian limes to be included in the genus Citrus, and most authorities treat the desert lime this way. Citrus glauca is one of the most resilient Citrus species, and is comparatively heat, drought, and cold tolerant. Hence the species is potentially important for Citrus breeding programs, and readily hybridises with many common Citrus species. 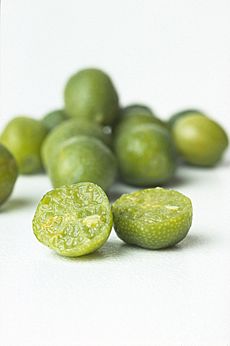 A shrub or small tree to 12 metres (39 ft), it has several unusual characteristics. It is cold, heat, drought and salinity tolerant and thought evergreen. If the rains should fail it will shed its leaves and live off the green bark on the plant branches. It will set fruit almost immediately after flowering and is the earliest citrus to do so. Fruit is small and variable and depends on current climatic conditions and genetic make-up. Thorns appear on low-growing branches to prevent grazing by rabbits, kangaroos, cattle etc but cease on branches above the grazing level. The limes are small with an intense piquant flavour, and good rainfall years produce an abundance of fruit. 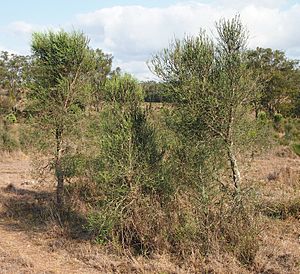 Citrus glauca in the wild

The desert lime fruit is a highly prized bushfood. Traditionally, it is wild-harvested from surviving bushland areas, where it is relatively common. However, C. glauca has also been extensively cleared from some areas due to the ongoing conversion of the wild bush into agricultural fields. The fruit are used in a range of products, including marmalades, beverages, and succade. It has a strong lime-like flavour.

The Australian Outback lime was selected by CSIRO scientists from the regular desert lime. It is characterised by its upright habit, relatively large, flavoursome fruit, high yield, uniform ripening time, lack of thorns, and suitability for mechanical harvesting. The Australian Outback lime was cultivated at the former CSIRO Plant Industry site at Merbein, Victoria by Steve Sykes. 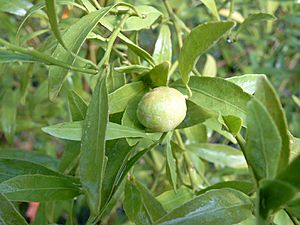 All content from Kiddle encyclopedia articles (including the article images and facts) can be freely used under Attribution-ShareAlike license, unless stated otherwise. Cite this article:
Citrus glauca Facts for Kids. Kiddle Encyclopedia.