Vithana Kuruppu Arachchilage Clarence Arthur Somasinghe Wijewardena (Sinhala: ක්ලැරන්ස් විජේවර්ධන, Tamil: கிளாரன்ஸ் விஜேவர்தன; 3 August 1943 – 13 December 1996) was a Sri Lankan singer, composer and musician. Considered as one of the most respected musicians in Sri Lanka, Wijewardena revolutionized Sri Lankan Sinhala Pop Music with the use of the electric guitar in Sinhala music, in the 1960s. Due to his influence on Sinhala pop music, he is often named as the father of Sri Lankan pop music.

Clarence Wijewardena was born on 3 August 1943, in Haputale, Sri Lanka, to an estate medical practitioner. His family moved to Batugedara, Ratnapura, and Clarence abandoned a budding career as a planter to pursue music full-time. He completed education from Hatton Highland College and Mahasen College, Yatawatta.

He married Sheela Ramadasa and they had one daughter, Amila Priyadarshani.

Wijewardena died on 13 December 1996, at the age of 53, in Sri Lanka after a long struggle against ruptured gastric ulcers and gangrene due to acute Diabetes.

Wijewardena formed the Moonstones at the age of 21 with Annesley Malewana as lead vocalist. Managed by an advertising icon, Sri Sangabo Corea, the group recorded several songs, which aired on the Saturday Star program in 1966. The young musicians were mentored by Sri Sangabo Corea, together with veteran Radio Ceylon/SLBC broadcasters Vernon Corea and Vijaya Corea. Their 1968 debut EP "Mango Nanda" was released on the JVPC007 Philips label selling up to 5,000 copies. It included the songs Mango Nanda, Ruwan Puraya, Seetha Ude and Menike. Their second release "More Hits by the Moonstones" came out in November that year, on the Sooriya label and included the hits Kalu Mama, Rosa Male, Ramani and Goyam Kapanawa. Later the song Mango Nanda was selected the best Sinhala song by the Hit Parade program on Radio Ceylon as well. In 1969, the Moonstones welcomed female vocalist Indrani Perera who sang lead on the best selling hit Dilhani. Wijewardena himself only sang lead on Dileepa Podi Puthu an adaptation of a poem written by Karunaratne Abeysekera to his son.

During the 'Moonstones' era, Wijewardena, who performed as a composer and music director, became a singer. Wijewardena took the initiative to start a three-member band, he was a self taught guitarist. However, later the 'Moonstones' were formed with Annesley playing the key role as lead singer. After he left the Moonstones in 1970, he held a musical show in Moratuwa with Shanaka Perera and Wijith Peiris and the show was named as "Breakaways from the Moonstones". The late Mike Goonesekera took over the reins of the Moonstones after the departure of Clarence.

In 1972, Wijewardena and Gunaratne left the Golden Chimes and they both formed a new band known as Super Golden Chimes also with the support of Annesley in 1973. Wijewardena formed the "Super Golden Chimes" back in the company of his lifelong friend Annesley. It was one of the most productive music groups in Sri Lanka and together they hit the number one slot in the Sri Lankan music charts on both the Sinhala and English Services of Radio Ceylon and subsequently the Sri Lanka Broadcasting Corporation. For many years they enjoyed the reputation as Sri Lanka's number one group in the 1970s and 1980s. After three years Wijewardena decided to go solo when Annesley announced his plans for marriage.

Wijewardena experimented with sitar music and introduced the sitar to some of the songs of the 'Moonstones. For the first time in Sri Lanka, he used a guitar wah wah pedal for the song Pemkathwawa for a recording. Also the song Sigiriya was the first Bossa nova beat song in Sri Lanka and later he used this beat for the songs Piyaneni, Mage Palpathe, Muhudu Rella, Renin Piyabanna, Maliniye, Ramya, Ran Monarun (Winslow Six), Lalitha Kala (Chithra Somapala). Also he used two guitar players to play lead parts and counterparts of songs such as Sumudu Mal Pipinu and Dileepa Podi Puthu. For the first time in Sri Lanka he used the blocked guitar tone for the song Kusumalatha. Wijewardena introduced some of the guitar techniques through his songs via a single guitar harmony style in the introduction of "Dellepa podi puthu" and arpeggio styles in "Sihina Lowak" and "Malata Bambareku Se".

Wijewardena composed a song Ma Langin that was in the 1960s "Twist" style and released the song in Yugayen Yugayata cassette in 1989. For the song Dineka Me Nadee Theere, he used mute guitar technique for the introduction.

He entered the Sinhala film music industry with the 1975 blockbuster Sikuruliya directed by H. D. Premaratne. The sound track was supplied by the Golden Chimes – the film includes a scene where Wijewardena and the Golden Chimes perform at a party. For the film, he also used western musical instruments as well as eastern musical instruments. The song Wasanthaye Mal Kekulay sung by Indrani Perera was composed by him was the first song that consists of five lines in the chorus part of the song. He also composed music for the 1978 film Apeksha directed by Premaratne.

Wijewardena directed music for the two popular television serial Susima and Nidikumba Mal. He was the composer and the music director for all the six songs of Susima teledrama, including Desa Piyagath Kala sung by Jackson Anthony and George Senanayake. During this time he got the opportunity to compose and direct music for maestro W. D. Amaradeva for the song Sasara Gewa Yana which contained in serial Nidikumba Mal directed by Sydney Chandrasekara. When the Royal Tusker of the Temple of Tooth Relic Raja died, he composed and music directed a song about the royal tusker and it was named as Kandu Sikarin Wata Senkadagala Pura. It was vocalized by the Ananda Perera who was the leader of the Siha Shakthi music band.

Wijewardena has composed and directed music for a number of songs for the daughters and sons of his friends and relatives. He composed Piyaneni in memory of the late Reverend Canon Ivan Corea who was the father of Radio Ceylon broadcaster, Vernon Corea. He had met Corea in Maha Nuge Gardens in the 1960s during his visits to meet with Vernon Corea. The song became an instant hit in South Asia and to this day it is sung by Annesley on his world tours. 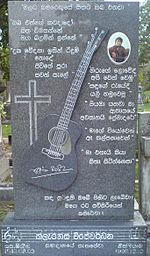 Wijewardena composed a song for the son of Vijaya Corea and it was titled as Viran Bilindhu Puthe. After that Wijewardena changed the chorus part of the song and sang that song as Kiri Muhuda Kalabala. He also composed a song for the son of Chanaka and Lankika Perera and it was titled as Sihina Pathum Wimane. He also composed the song Naththal Seeya in the early 1970s. His first solo is Dileepa Podi Puthu was written by Radio Ceylon broadcaster, Karunaratne Abeysekera for his own son.

In the early 1970s, Wijewardena invited Vernon Corea who had mentored him from the start to write the notes on a Lotus LP sleeve. Vernon Corea wrote: "We have all shared the treat of your lovely Lyrics, your tuneful compositions, your friendly presentation and your spontaneous sense of sharing with your followers, your treasury of talent. Keep going, keep growing, keep glowing". In 1976, when Vernon Corea was invited to present the first Asian radio programme in English on BBC Radio London called 'London Sounds Eastern' he played the music of Wijewardena and Annesley, introducing them to a whole new audience in London. 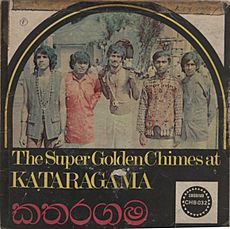 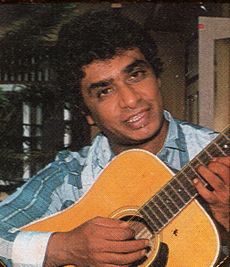 All of Wijewardena's compositions have been recorded at some of the island's best recording studios and under the best producing labels in Sri Lanka. Some of the early 1960s recordings were at Augie Ranaweera's studio in Bambalapitiya. Wijewardena organised three musical shows with Annesley and Indrani at BMICH in Colombo. Wijewardena proved to be quite a hit in London when broadcaster Vernon Corea broadcast his music on BBC Radio London 206 on his popular radio program, London Sounds Eastern. Wijewardena and Annesley frequently toured the United Kingdom in the 1980s playing to huge audiences in London.

Wijewardena was concerned and made a statement to Sathsara, an art magazine in Sri Lanka regarding the song Thana Nilla Dige and how its singer Saman De Silva was not given due credit for the song and published a full page article about the song in a newspaper around the time of the release of the song and cassette but did not mention the name of the composer. 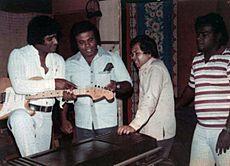 Many of his songs are considered classics, and continue to enjoy ample airtime on Sri Lankan television and radio broadcasts and on some overseas radio stations. The songs such as Rasa Pirunu Katha, Geeyakin Kese, Eatha Ran Wiman Yowun Sihina Loke, etc. are very popular among present generation which again demonstrated his talent in composing music (also as a lyricist) for the future.

On 21 March 2017, the concert "Unfogettable Melodies of Clarence Live in Concert" was held at 6.30 pm at the Nelum Pokuna Theater, Colombo.

All content from Kiddle encyclopedia articles (including the article images and facts) can be freely used under Attribution-ShareAlike license, unless stated otherwise. Cite this article:
Clarence Wijewardena Facts for Kids. Kiddle Encyclopedia.