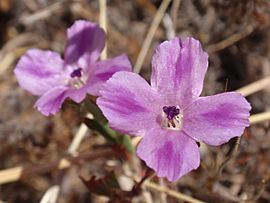 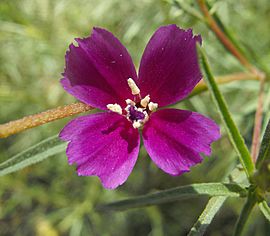 Clarkia purpurea is a species of wildflower known by the common names winecup clarkia, winecup fairyfan, and purple clarkia.

This annual plant is native to western North America, including: Baja California; California; Arizona; Oregon; Washington; and British Columbia. — where it is found in a diverse variety of habitats. In the California Floristic Province it is found in all the zones, except the deserts, from the coasts to high interior mountains, including the Sierra Nevada.

Clarkia purpurea erects a thin reddish stem which may approach 1 meter (3 ft.) in height and has a few lance-shaped leaves.

The bowl-shaped flowers have four petals, usually one to two centimeters long. They are in shades of pink, purple, or deep wine red; often with a streak or spot of pink or red in the middle.

The Indigenous peoples of California sowed the plant, to later harvest the seeds to grind for food.

Clarkia purpurea was first described in 1796 as Oenothera purpurea in Curtis's Botanical Magazine. In 1918, it was redescribed by Aven Nelson and James Francis Macbride, who allocated it to the genus Clarkia, as Clarkia purpurea.

All content from Kiddle encyclopedia articles (including the article images and facts) can be freely used under Attribution-ShareAlike license, unless stated otherwise. Cite this article:
Clarkia purpurea Facts for Kids. Kiddle Encyclopedia.