Claude Moore Colonial Farm, originally Turkey Run Farm, is a U.S. park in Virginia recreating and reenacting life on a tenant farm c. 1771. Turkey Run is the only privately run park in the U.S. National Park Service (NPS). The Friends of Claude Moore Colonial Farm at Turkey Run Inc., a privately funded foundation, pays for all activities on the farm, while the land is owned by the NPS. They receive only certain maintenance tasks from the Park Service. The Farm is located in Langley, Virginia, a suburb of McLean, Virginia, next to the George Bush Center for Intelligence and the Turner-Fairbank Highway Research Center. Market Fair events are held at the park.

The mission of Turkey Run is to recreate the life of 1771 tenant farmers. The vast majority of Virginians in 1771 were tenant farmers who grew tobacco to pay their rent and grew food to eat. By contrast, Colonial Williamsburg demonstrates the life of the small upper crust — merchants and landowners. 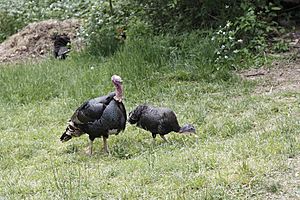 Originally named Turkey Run Farm when it opened in July 1973 as a National Park Service operation, it was renamed in 1981 for local land developer, Dr. Claude Moore, whose large bequest at the time of his death allowed the farm park to establish itself as the only autonomous site in the park system. It takes no NPS funding and operates off of the dividends of its endowment, volunteer run fundraising efforts and donations from the public.

The Farm operation has expanded its facilities over the years. The GateHouse Giftshop was built to replace the old on-your-honor admission fee drop box and an event deck and the Bounty Garden were all added at the front parking lot during the last decade. Post 9-11, a new access road was cut through the upper pasture so that access to the farm office no longer passes through the security gate of the Federal Highway Administration headquarters, behind the CIA grounds. "Chez Puce," formally the site of the farm's alternating book and "garage" sales, became a full-fledged, used book store [1] , open Wednesday through Saturday, in 2011.

Turkey Run is run by a small paid professional staff, supplemented by many volunteers both behind the scenes and in costume. The interpretive staff, including pre-teens and teenagers who portray the farm children, demonstrate 1771 farm life, including field work, crafts, cooking, and other special activities. Staff (including volunteers) use "first person" to demonstrate living history and help visitors feel as if they've stepped back in time. The Farm's heirloom crops and heritage breed livestock are carefully researched to provide as accurate an atmosphere as possible.

The Farm has also cooperated with Fairfax County in providing work-release parolees with court-required employment. On a working farm, this means labor. 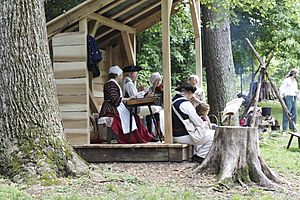 The highlight of the year is the Market Fair, held the third full weekends of May, July, and October. The Market Fair is enhanced by the participation of a cadre of long-time volunteers who man the stands, including a blacksmith, cabinet maker, milliner, herb and flower seller, a toy store, scriptorium, puppet theatre, potter, chair bodger, chicken roasting, a tavern and more. The importance of the tavern in Colonial life is captured on the sign displayed therein: "Beer is proof that God loves us, and wants us to be happy. —Benjamin Franklin."

Many of the participants are members of American Revolutionary War (and other) re-enactor groups and appear at other colonial historical events. The gathering and threshing of wheat and the preparation of the tobacco crop are annual events. A colonial Wassail, including the blessing of the orchard, is the final event of the season, in mid-December.

The Farm is open to visitors (including school groups) Wednesday to Sunday, 10 AM to 4:30 PM from the beginning of April to mid-December. An admission charge of $3 for adults or $2 for children and seniors applies, and memberships are available which permit free admission to the Farm and all 18th-century events including Dairy Day, Salting Fish, Herbal Remedies, Wheat Harvest, Tobacco Harvest, Pickling Produce, an 18th-century Wedding, Spinning and Dyeing Day and more. Market Fairs, The Farm Skills Program, Environmental Living Center programs and occasional 18th-century themed workshops have additional admission charges. The Farm's current Calendar of Events and other information can be seen at the website, [2].

All content from Kiddle encyclopedia articles (including the article images and facts) can be freely used under Attribution-ShareAlike license, unless stated otherwise. Cite this article:
Claude Moore Colonial Farm Facts for Kids. Kiddle Encyclopedia.