The Climate of Beaumont, Texas covers the averages and extremes in past weather seen within the city of Beaumont, Texas. The city is within the humid subtropical climate regime, and is within the Piney Woods region of eastern Texas. The area around Beaumont receives the most rainfall in the state: more than 48 inches (1,200 mm) annually. Summers in the area are usually hot and humid, due to the moisture that flows inland off of the Gulf of Mexico. Winters are usually kept mild by the warm gulf waters. Hurricanes also pose a threat to the area. Hurricane Rita in 2005 and Hurricane Ike in 2008 were the most recent significant storms to strike.

Summers in the area are usually hot and humid, due to the moisture that flows inland off of the Gulf of Mexico. Winters are usually kept mild by the warm gulf waters.

The Beaumont area receives the most rainfall in the state: more than 48 inches (1,200 mm) annually. This is due to the warm gulf waters that carry humid air to the region, where it condenses and precipitates.

While wintry precipitation is unusual, it does occur. The most recent significant wintry events were December 11, 2008, and December 4, 2009. The December 11, 2008 event was the first notable snowfall accumulation in Beaumont since December 24, 2004. More recently, the Beaumont area recorded a trace of snow on February 24, 2010. In 1997, a severe and historic ice storm struck the region, leaving thousands without power and major tree damage in its wake. In unofficial records, Beaumont received as much as 30 inches of snow during the blizzard of February 1895 that impacted the gulf coast. The temperature is reported to have dropped to a low of 4°F after the storm. 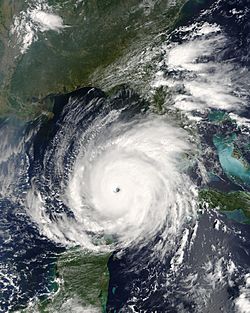 In October of 1886, a category 3 hurricane came ashore near Sabine Pass, a coastal community southeast of Beaumont, causing widespread wind damage and coastal flooding in the area.

In 1957, Hurricane Audrey, a category 4 hurricane, roared ashore near the Sabine River, causing major coastal flooding and wind damage. At least 416 people lost their lives (other estimates show over 500), mostly in Louisiana due to drowning from storm surge.

In 1963, Hurricane Cindy, a category 1 hurricane, affected the upper Texas coast and western Louisiana. Much of the storm's damage was due to flooding resulting from over 20 inches of rain. 4,000 homes in Jefferson, Orange, and Newton counties were flooded.

Tropical Storm Danielle struck the area in 1980. The primary impact from Danielle was flooding. A National Hurricane Center preliminary report noted "...There was major Metropolitan area flooding in the Beaumont-Port Arthur area of Texas requiring evacuation of some homes....One fatality was caused directly by the storm when an automobile was driven beyond a barricade into 15 feet of water in Beaumont, Texas."

In 1983, Hurricane Alicia struck the Texas coast west of the Beaumont area; however, the city did receive light impacts from the storm.

In June of 1986, Hurricane Bonnie hit the Beaumont area as a category 1 hurricane. The storm's primary impact was flooding from heavy rain. Some locations near the city received 5 inches (130 mm) to 10 inches (250 mm) of rain, flooding many homes and businesses. Three people lost their lives due to Bonnie.

In June of 2001, Tropical Storm Allison struck the upper Texas coast. The worst impacts were felt west of the Beaumont area, but the city and the surrounding area still suffered damage from flooding. 7 inches (180 mm) to 10 inches (250 mm) of rain fell in and around Beaumont, causing widespread issues on roadways throughout the area.

On September 24, 2005, Hurricane Rita made landfall near the Texas/Louisiana border as a category 3 hurricane with 120 mph winds. The storm moved northward through the Beaumont-Port Arthur Metropolitan Area and areas north, damaging or destroying many buildings. Thousands of trees were downed across the area, and power was knocked out to hundreds of thousands of residents. In advance of the storm, one of the largest evacuations in U.S. history took place, as millions of people fled the coastal areas of Texas. Hurricane Rita was the worst hurricane to strike the Beaumont area since Audrey in 1957. A total of $12 billion in damages occurred and 7 people lost their lives due to the storm.

On September 13, 2008, Hurricane Ike struck the upper Texas coast as a category 2 hurricane, causing major wind damage and storm surge flooding. Many buildings sustained damage in Beaumont, although the strongest winds remained west of the city. In total, Ike caused $31 billion in damages and 112 people lost their lives in the storm.

All content from Kiddle encyclopedia articles (including the article images and facts) can be freely used under Attribution-ShareAlike license, unless stated otherwise. Cite this article:
Climate of Beaumont, Texas Facts for Kids. Kiddle Encyclopedia.