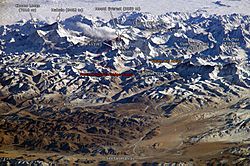 A climbing route is a path by which a climber reaches the top of a mountain, rock, or ice wall. Routes can vary dramatically in difficulty and grade; once committed to that ascent, it can sometimes be difficult to stop or return. Choice of route can be critically important. Guidebooks, if available, are helpful in providing detailed diagrams and photographs of routes.

In the earliest days of hillwalking and mountaineering, climbers got to the top by whatever means got them there. Little information about how they did it is available. During the 19th century, as explorers of the Alps tried ever harder summits, it became clear that choosing an eastern face over a southwestern ridge could spell the difference between success or failure.

One example was the first ascent of the Matterhorn, which had been repeatedly and unsuccessfully attempted via the southern side. The strata there tended to slope down and away while the rocks of the northeastern ridge (the one closest to Zermatt) tilted up - a steeper, but safer route.

As technique developed, and mountains of the world were ascended via easy routes, climbers began to challenge themselves by looking for and trying harder routes.

An aesthetic element came in, as well. An easy, but confusing route, weaving back and forth across a face was less desirable than a direct route along a scenic ridge. Safe routes that yielded to good technique were more desirable than routes with loose rock and awkward climbing.

Climbing routes that were overlooked or required greater technical skill became associated with the climber(s) who first climbed them. It became common practice for the first climber to choose a name for the route.

Examples : D1 on The Diamond and The Nose on El Capitan are climbing routes.

All content from Kiddle encyclopedia articles (including the article images and facts) can be freely used under Attribution-ShareAlike license, unless stated otherwise. Cite this article:
Climbing route Facts for Kids. Kiddle Encyclopedia.