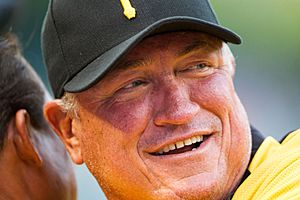 Clinton Merrick Hurdle (born July 30, 1957) is a retired manager of MLB teams. His most recent job was as the manager of the the Pittsburgh Pirates. On September 28 2019, Hurdle was fired by the Pirates. He decided not to take a new job, and instead retired. During the He has previously managed the Colorado Rockies. In 2007, he led the Rockies to the World Series, which they lost to the Boston Red Sox. Before he became a manager, Hurdle played baseball as an outfielder and was a member of the Kansas City Royals, Cincinnati Reds, New York Mets, and St. Louis Cardinals.

All content from Kiddle encyclopedia articles (including the article images and facts) can be freely used under Attribution-ShareAlike license, unless stated otherwise. Cite this article:
Clint Hurdle Facts for Kids. Kiddle Encyclopedia.