Clinton is an unincorporated community situated on a peninsula in the middle of Clinton Lake in Douglas County, Kansas, United States.

The town of Bloomington was settled in June 1854 but was not called as such until April 1855 when Harrison Burson applied to the U.S. Government for a post office. Within eight months of the area being settled some 530 settlers were in the area that would become Bloomington-Clinton. The people of Bloomington were greatly anti-slavery and helped slaves escape through the Underground Railroad. In early 1857, the north half of Bloomington was moved to a new location and the south portion of the town was renamed Winchester.

Clinton and Bloomington quickly became rivals since they were only separated by about three miles. Bloomington started losing ground in 1858 when on August 30, the post office was moved to Clinton. Within the first five years of existence, Clinton constructed two schoolhouses, two churches and a town hall. In 1869, the Clinton Cemetery was established on land already used for a cemetery and is considered one of the oldest burial grounds in Douglas County. 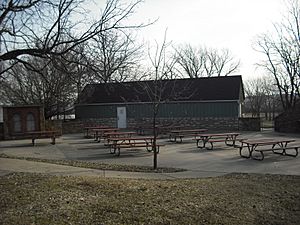 The St. Louis, Lawrence & Denver Railroad was constructed through Bloomington and Clinton in 1873 but proved to be virtually worthless and was abandoned by 1894. In 1876, most of Bloomington had reverted into farmland and was considered vacated.

Started in the mid-1960s, land was purchased for the construction of Clinton Lake and the entire town of Bloomington was bulldozed leaving only the J.C. Steele house and a milk shed standing. The house has been torn down but the shed still stands as the Clinton Lake Museum near Bloomington Beach in the Bloomington Recreation Area.

In August 1856, the Lawrence supply route was cut off and the townspeople were forced to travel to Lecompton which was strongly pro-slavery. Henry Hiatt and several other people were taken prisoner and fifty proslavery ruffians began marching to Bloomington. A team of 400 or 800 men marched toward Lecompton and although a confrontation was avoided it resulted in the looting and burning of Colonel Henry T. Titus' home (known as the Battle of Fort Titus).

A splinter group from William Quantrill's raid on Lawrence in 1863 rode through Bloomington but caused more damage and harm when passing through Lone Star which is about five miles south of Clinton.

All content from Kiddle encyclopedia articles (including the article images and facts) can be freely used under Attribution-ShareAlike license, unless stated otherwise. Cite this article:
Clinton, Kansas Facts for Kids. Kiddle Encyclopedia.