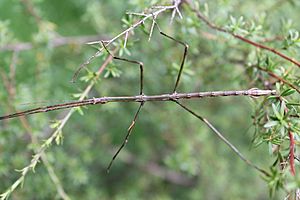 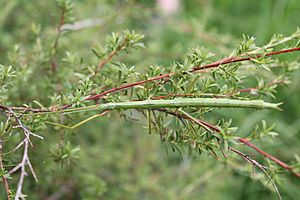 Clitarchus hookeri is found from Northland to the Wellington region in the south of the North Island of New Zealand. On the South Island it is not as widespread, being found mainly in eastern coastal areas from Nelson and Marlborough in the north through Canterbury to its southern limit in Dunedin. It is also found in Great Britain, where it has been introduced. The UK population is all-female but came from a sexual population in Taranaki. The species is most commonly found on manuka, but has also been observed feeding on kanuka, pohutukawa, Muehlenbeckia australis, roses, white rata and Coprosma. 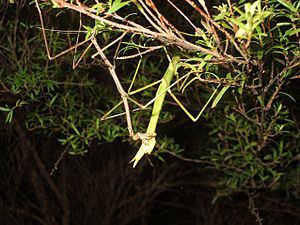 Clitarchus hookeri are hemimetabolous, meaning that the nymphs grow through a series of six instars before a final moult into their adult stage.

Adults are found during the summer months and are mostly active at night. During the day they hide among the branches of their host trees, before emerging at sunset to feed and mate. Females hang off the edge of branches feeding on the leaves of their host plant and signalling to males by releasing a mix of volatile chemicals. The long-legged adult males move around at night in search of mates. 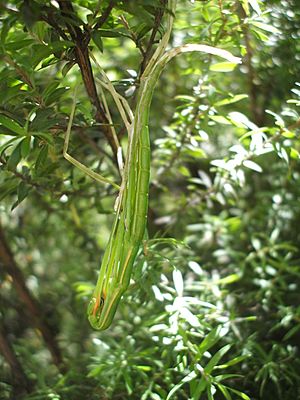 Clitarchus hookeri is geographically parthenogenetic, meaning that in some localities females do not mate to reproduce. Instead, they are able to produce fertile eggs without mating. In the South Island Clitarchus hookeri males are rare or absent, while in the North Island both asexual and sexual populations occur. Although females who reproduce asexually lay similar number of eggs and have similar hatching success as those who reproduce sexually, their eggs took longer to hatch. Eggs from parthenogenic females took between 21–23 weeks, while eggs from mated females took between 9–16 weeks. Females from parthenogenetic populations show a barrier to fertilization in captivity when provided with mates, however, males cannot distinguish between sexual and parthenogenetic females. However, two wild populations in New Zealand have reverted to sexual reproduction very recently. 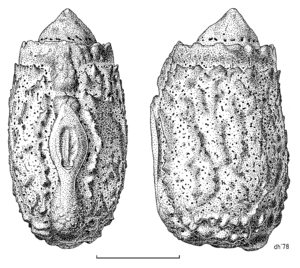 All content from Kiddle encyclopedia articles (including the article images and facts) can be freely used under Attribution-ShareAlike license, unless stated otherwise. Cite this article:
Clitarchus hookeri Facts for Kids. Kiddle Encyclopedia.