Coat of Arms of Denmark facts for kids

The coat of arms of Denmark consists of three crowned blue lions with nine red hearts, all in a golden shield. 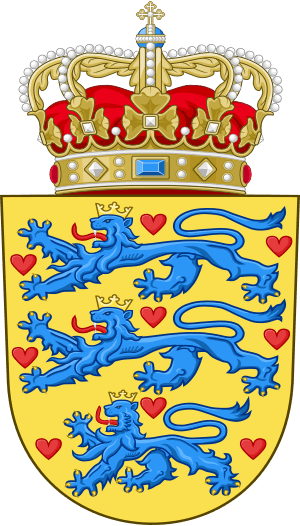 The Coat of Arms of Denmark 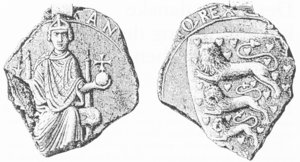 The seal of King Canute VI of Denmark is the oldest known example of the coat of arms of Denmark. It is from around 1190. 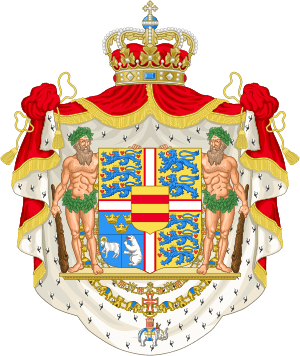 The large coat of arms comprise symbols representing all parts of the Danish kingdom - or to be precise: only territories that are still part of the Kingdom of Denmark. In the coat of arms shown to the left the upper left part of the shield (the three lions) represents Denmark. In the lower part the three crowns (only two are visible) represents Sweden, this is for historic reasons. The polar bear represents Greenland and the ram represents the Faroe Islands. The two lions in the upper right side represents the principality of Slesvig. Until 1972, it also included other symbols representing principalities in Germany and parts of present-day Sweden that used to be ruled by the Danish king.

In 1972 when King Frederik IX died and Margrethe II became queen the coat of arms of the royal family was redesigned, and today it only comprises symbols representing the current parts of the Danish Kingdom.

All content from Kiddle encyclopedia articles (including the article images and facts) can be freely used under Attribution-ShareAlike license, unless stated otherwise. Cite this article:
Coat of Arms of Denmark Facts for Kids. Kiddle Encyclopedia.